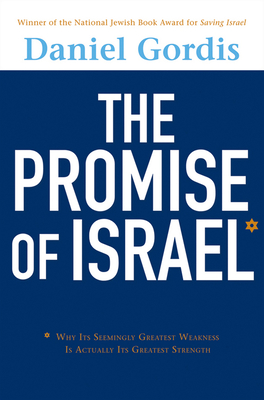 The Promise of Israel

Why Its Seemingly Greatest Weakness Is Actually Its Greatest Strength

Why Israel's greatest weakness is its greatest strength, and what its supporters and enemies can learn from its success

Israel's critics in the West insist that no country founded on a single religion or culture can stay democratic and prosperous--but they're wrong. In The Promise of Israel, Daniel Gordis points out that Israel has defied that conventional wisdom. It has provided its citizens infinitely greater liberty and prosperity than anyone expected, faring far better than any other young nation. Israel's ""magic"" is a unique blend of democracy and tradition, of unabashed particularism coupled to intellectual and cultural openness. Given Israel's success, it would make sense for many other countries, from Rwanda to Afghanistan and even Iran, to look at how they've done it. In fact, rather than seeking to destroy Israel, the Palestinians would serve their own best interests by trying to copy it.

Certain to generate controversy and debate, The Promise of Israel is one of the most interesting and original books about Israel in years.

DANIEL GORDIS is Senior Vice President and Koret Distinguished Fellow at the Shalem Center and a columnist for the "Jerusalem Post." He has also written for the "New York Times," " Commentary," " Tikkun," the "Forward," and the "New York Times Magazine." He is the author of several books, including "Saving Israel, " winner of a National Jewish Book Award.
Loading...
or support indie stores by buying on