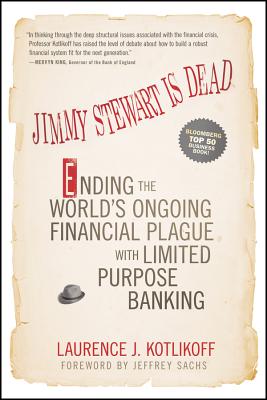 Discover how the global financial plague is poised to return, and what can be done to stop it

This is not your father's financial system. Jimmy Stewart, the trustworthy, honest banker in the movie, It's a Wonderful Life, is dead. And so is his small-town bank, Bailey Savings & Loan. Instead, we're watching It's a Horrible Mess with Wall Street (aka the Vegas Strip) playing ever larger craps with our economy and our tax dollars.

This book, written by one of the world's most respected economist, describes in lively, humorous, simple, but also deadly serious terms the big con underlying the big game?the web of interconnected financial, political, and regulatory malfeasance that culminated in financial meltdown and brought us to our economic knees. But it also proposes an amazingly simply solution?Limited Purpose Banking to make Wall Street safe for Main Street.

Jimmy Stewart Is Dead will fundamentally change the way you think about the economy, financial markets, and the government.

LAURENCE J. KOTLIKOFF is a William Fairfield Warren Professor of Economics at Boston University, Fellow of the American Academy of Arts and Sciences, Research Associate of the National Bureau of Economic Research, Fellow of the Econometric Society, and former Senior Economist, President's Council of Economic Advisers. Coauthor of The Coming Generational Storm and Spend 'Til the End and author of The Healthcare Fix, and Bloomberg columnist, Kotlikoff publishes extensively in the nation's leading newspapers, magazines, and financial websites on financial reform, taxes, saving, growth, deficits, Social Security, healthcare, pensions, and personal finance.
Loading...
or support indie stores by buying on