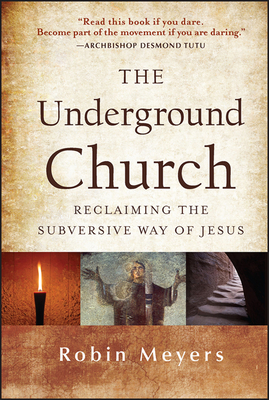 Reclaiming the Subversive Way of Jesus

The Underground Church proposes that the faithful recapture the spirit of the early church with its emphasis on what Christians do rather than what they believe. Prominent progressive writer, speaker, and minister Robin Meyers proposes that the best way to recapture the spirit of the early Christian church is to recognize that Jesus-following was and must be again subversive in the best sense of the word because the gospel taken seriously turns the world upside down.

No matter how the church may organize itself or worship, the defining characteristic of church of the future will be its Jesus-inspired countercultural witness.

Robin Meyers is a nationally known United Church of Christ minister and peace activist. His congregation describes itself as unapologetically Christian and unapologetically liberal (mayflowerucc.org). He writes for Christian Century, is an award-winning commentator for NPR, and a professor of rhetoric in the philosophy department at Oklahoma City University. He is married to Shawn Meyers, an artist, and they are the parents of three children, Blue, Chelsea, and Cass. More information can be found at www.robinmeyers.com
Loading...
or support indie stores by buying on