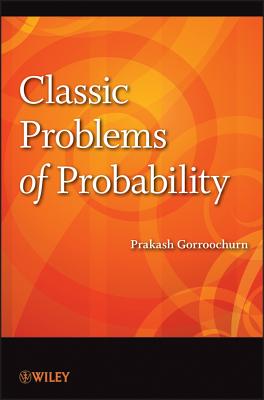 Winner of the 2012 PROSE Award for Mathematics from The American Publishers Awards for Professional and Scholarly Excellence.

A great book, one that I will certainly add to my personal library.
--Paul J. Nahin, Professor Emeritus of Electrical Engineering, University of New Hampshire

Classic Problems of Probability presents a lively account of the most intriguing aspects of statistics. The book features a large collection of more than thirty classic probability problems which have been carefully selected for their interesting history, the way they have shaped the field, and their counterintuitive nature.

From Cardano's 1564 Games of Chance to Jacob Bernoulli's 1713 Golden Theorem to Parrondo's 1996 Perplexing Paradox, the book clearly outlines the puzzles and problems of probability, interweaving the discussion with rich historical detail and the story of how the mathematicians involved arrived at their solutions. Each problem is given an in-depth treatment, including detailed and rigorous mathematical proofs as needed. Some of the fascinating topics discussed by the author include:

Classic Problems of Probability is an eye-opening, one-of-a-kind reference for researchers and professionals interested in the history of probability and the varied problem-solving strategies employed throughout the ages. The book also serves as an insightful supplement for courses on mathematical probability and introductory probability and statistics at the undergraduate level.

PRAKASH GORROOCHURN, PhD, is Assistant Professor in the Department of Biostatistics at Columbia University, where he is also a statistical consultant in the School of Social Work. Dr. Gorroochurn has published extensively in his areas of research interest, which include mathematical population genetics and genetic epidemiology.
Loading...
or support indie stores by buying on