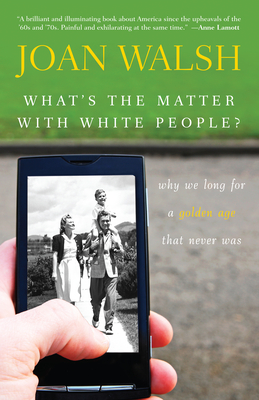 Why We Long for a Golden Age That Never Was

""In this wonderfully insightful book, Joan Walsh shows how America built a large and vibrant (although mostly white) middle class that fueled the greatest economic boom in history and made a reality of the American dream. Hers is the story of postwar America told through a working class New York Irish Catholic family whose political divisions mirrored the nation's. Moving and powerful, her account will help people of all races think through how we can build a just and prosperous multiracial America."" --Robert B. Reich

""A brilliant and illuminating book about America since the upheavals of the '60s and '70s. What's the Matter with White People? is about the heart and soul of America, from our Founding Fathers to Hillary and Barack.It's about our middle class, which so recently flourished, and how it has been injured and diminished almost beyond repair by greed and racist fear-mongering. It's about America's greatness and delusion, the betrayal of the working class, and the fragmentation of the Democratic party. It's about how Walsh's own Irish Catholic family from New York was treated, responded and fared in the years between Richard Nixon and Barack Obama Walsh writes with passion, precision, and insight into how racism has made such a bold public comeback. Her book was heaven for a political junkie like me, somehow managing to be painful and exhilarating at the same time."" --Anne Lamott

""Joan Walsh's reflections and observations from her personal journey as an Irish Catholic daughter of a Northeastern blue collar family provide a unique window into the hearts, aspirations, anguish, anger, fears, and pride of white working class voters during the twentieth and twenty-first centuries. No one can properly understand current class politics and race relations in America unless they've read this book."" --Dr. Clarence B. Jones

The size and stability of the American middle class were once the envy of the world. But changes unleashed in the 1960s pitted Americans against one another politically in new and destructive ways. These battles continued to rage from that day to now, while everyone has fallen behind economically except the wealthy. Right-wing culture warriors blamed the decline on the moral shortcomings of ""other"" Americans--black people, feminists, gays, immigrants, union members--to court a fearful white working- and middle-class base with ever more bitter ""us vs. them"" politics. Liberals tried, but mostly failed, to make the case that we're all in this together.

Walsh connects the dots of American decline through trends that began in the 1970s and continue today--including the demise of unions, the stagnation of middle-class wages, the extension of the right's ""Southern Strategy"" throughout the country, the victory of Reagan Republicanism, the increase in income inequality, and the drop in economic mobility.

Citing her extended family as a case in point, Walsh shows how liberals unwittingly collaborated in the ""us vs. them"" narrative, rather than developing an inspiring, persuasive vision of a more fair, united America. She also explores how the GOP's renewed culture war.

JOAN WALSH is editor at large of "Salon "and an MSNBC political analyst. She spent six years as "Salon"'s editor in chief.
or
Buy Here
Copyright © 2020 American Booksellers Association