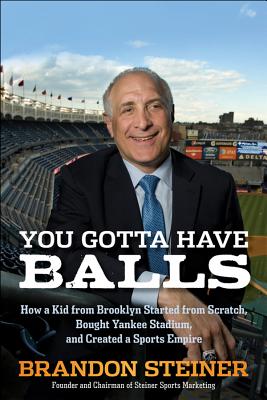 You Gotta Have Balls (Hardcover)

How a Kid from Brooklyn Started from Scratch, Bought Yankee Stadium, and Created a Sports Empire

Brandon Steiner went from a kid who sat in the nosebleed seatsat Yankee and Shea Stadiums to CEO of Steiner Sports MarketingInc., one of the largest sports marketing and memorabilia companiesin the United States, with an inventory of more than 10,000collectibles. You Gotta Have Balls details Steiner'smultiple entrepreneurial adventures, where he has both learned andtaught others his fair share of "rules." Along the way, hedeveloped some of the most innovative approaches tobusiness--methods that many of today's companies would be wiseto observe and employ themselves.

You Gotta Have Balls follows Steiner on his pathway tosuccess by demonstrating the business philosophies that allowed himto become the powerful magnate that he is. These idealsinclude:

Learn to clearly identify ways to help others rather than sellto them, to align employees and partners with their strengths, andto discover a path where you're most likely to succeed.

BRANDON STEINER is the founder and chairman of SteinerSports Marketing and Memorabilia, the largest company of its kindin America. Considered a sports marketing guru, Brandon is apermanent fixture in the media as a regular on ESPN Radio 1050 andas co-host of Yankees-Steiner: Memories of the Game on theYES Network. He is also regularly featured on CNBC, CNN, MSNBC, ESPN, and in newspapers including the New York Times and theWall Street Journal. The author of The Business Playbook: Leadership Lessons from the World of Sports, Brandon lives inScarsdale, New York, with his wife, Mara.
or
Not Currently Available for Direct Purchase
Copyright © 2020 American Booksellers Association