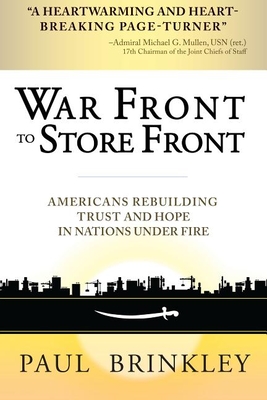 Americans Rebuilding Trust and Hope in Nations Under Fire

As the top-ranking official at the U.S. Department of Defense in charge of economic rebuilding, Brinkley and his organization of hundreds of business volunteers struggled against bureaucratic policies to revolutionize foreign aid by leveraging America's strength--its private sector. In doing so, his team demonstrated success in the midst of failure, and created hundreds of thousands of jobs in areas long written off by the civilian bureaucracy as hopeless.

Reporting directly to Secretary of Defense Robert Gates, Brinkley spent five years overseeing economic improvement in Iraq and Afghanistan. The lessons learned in these two nations were soon extended into the war-torn nations of Pakistan, Rwanda, and Sudan.

Brinkley, who worked under both the George W. Bush and Barack Obama Administrations, reveals why American foreign policy has left these nations in the Middle East and Africa disappointed, resentful, and suspicious of American intentions. Optimistic that America can deliver on its economic promise, Brinkley outlines in War Front to Store Front the necessary changes in U.S. foreign policy if we want to rebuild and revitalize an economy under fire.

Paul A. Brinkley served five years as Deputy Under Secretary of Defense and director of the Task Force for Business and Stability Operations, charged with the revitalizing the economies of Iraq and Afghanistan. He is the recipient of the Joint Distinguished Civilian Service Medal and the Secretary of Defense-Defense of Freedom Medal for injuries sustained in a car bomb attack in Baghdad in 2010. He has published articles in "Newsweek "and "Military Review "and has been profiled in "Businessweek, Fortune, New York Times, Washington Post, Der Spiegel, "and "The Economist."
Loading...
or support indie stores by buying on