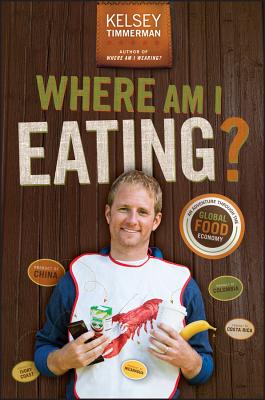 Where Am I Eating?

An Adventure Through the Global Food Economy

Bridges the gap between global farmers and fishermen and American consumers

America now imports twice as much food as it did a decade ago. What does this increased reliance on imported food mean for the people around the globe who produce our food? Kelsey Timmerman set out on a global quest to meet the farmers and fisherman who grow and catch our food, and also worked alongside them: loading lobster boats in Nicaragua, splitting cocoa beans with a machete in Ivory Coast, and hauling tomatoes in Ohio. Where Am I Eating? tells fascinating stories of the farmers and fishermen around the world who produce the food we eat, explaining what their lives are like and how our habits affect them.

This book shows how what we eat affects the lives of the people who produce our food. Through compelling stories, explores the global food economy including workers rights, the global food crisis, fair trade, and immigration.

Where Am I Eating? does not argue for or against the globalization of food, but personalizes it by observing the hope and opportunity, and sometimes the lack thereof, which the global food economy gives to the world's poorest producers.

KELSEY TIMMERMAN is a full-time speaker and writer and has spoken at more than seventy colleges and high schools about his first book, Where Am I Wearing?: A Global Tour to the Countries, Factories, and People That Make Our Clothes. He has written for the Christian Science Monitor and has been interviewed by media outlets around the world, including U.S. News & World Report, LA Weekly, News Talk Radio (Ireland), the Phnom Penh Post (Cambodia), NPR's Talk of the Nation, FoxNews Radio, and the World Vision Report. Kelsey lives in Muncie, Indiana, with his wife and two children.
Loading...
or
Not Currently Available for Direct Purchase