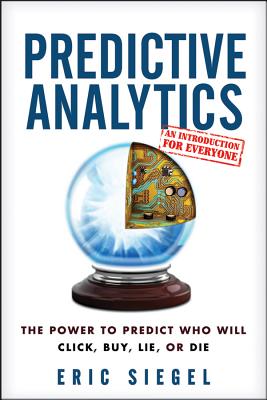 The Power to Predict Who Will Click, Buy, Lie, or Die

Award-winning - Used by over 30 universities - Translated into 9 languages

An introduction for everyone. In this rich, fascinating -- surprisingly accessible -- introduction, leading expert Eric Siegel reveals how predictive analytics works, and how it affects everyone every day. Rather than a "how to" for hands-on techies, the book serves lay readers and experts alike by covering new case studies and the latest state-of-the-art techniques.

Prediction is booming. It reinvents industries and runs the world. Companies, governments, law enforcement, hospitals, and universities are seizing upon the power. These institutions predict whether you're going to click, buy, lie, or die.

How? Prediction is powered by the world's most potent, flourishing unnatural resource: data. Accumulated in large part as the by-product of routine tasks, data is the unsalted, flavorless residue deposited en masse as organizations churn away. Surprise This heap of refuse is a gold mine. Big data embodies an extraordinary wealth of experience from which to learn.

Predictive Analytics unleashes the power of data. With this technology, the computer literally learns from data how to predict the future behavior of individuals. Perfect prediction is not possible, but putting odds on the future drives millions of decisions more effectively, determining whom to call, mail, investigate, incarcerate, set up on a date, or medicate.

In this lucid, captivating introduction -- now in its Revised and Updated edition -- former Columbia University professor and Predictive Analytics World founder Eric Siegel reveals the power and perils of prediction:


How does predictive analytics work? This jam-packed book satisfies by demystifying the intriguing science under the hood. For future hands-on practitioners pursuing a career in the field, it sets a strong foundation, delivers the prerequisite knowledge, and whets your appetite for more.

A truly omnipresent science, predictive analytics constantly affects our daily lives. Whether you are a consumer of it -- or consumed by it -- get a handle on the power of Predictive Analytics.

ERIC SIEGEL, PhD, founder of Predictive Analytics World and Executive Editor of the Predictive Analytics Times, makes the how and why of predictive analytics understandable and captivating. Eric is a former Columbia University professor--who used to sing educational songs to his students--and a renowned speaker, educator, and leader in the field.
Loading...
or
Not Currently Available for Direct Purchase