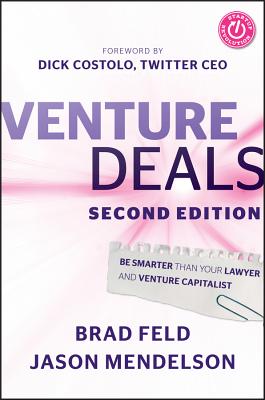 Be Smarter Than Your Lawyer and Venture Capitalist

As each new generation of entrepreneurs emerges, there is a renewed interest in how venture capital deals come together. Yet there is little reliable information focused on venture capital deals. Nobody understands this better than authors Brad Feld and Jason Mendelson. For more than twenty years, they've been involved in hundreds of venture capital financings, and now, with the Second Edition of Venture Deals, they continue to share their experiences in this field with you.

Engaging and informative, this reliable resource skillfully outlines the essential elements of the venture capital term sheet--from terms related to economics to terms related to control. It strives to give a balanced view of the particular terms along with the strategies to getting to a fair deal. In addition to examining the nuts and bolts of the term sheet, Venture Deals, Second Edition also introduces you to the various participants in the process and discusses how fundraising works.

Whether you're an experienced or aspiring entrepreneur, venture capitalist, or lawyer who partakes in these particular types of deals, you will benefit from the insights found throughout this new book.

Brad Feld has been an early-stage investor and entrepreneur for over twenty years. Prior to cofounding Foundry Group--a Boulder, Colorado-based early-stage venture capital fund that invests in information technology companies all over the United States--he cofounded Mobius Venture Capital. Prior to that, he founded Intensity Ventures, a company that helped launch and operate software companies. Feld is also a cofounder of TechStars and has been active with several nonprofit organizations. He is a nationally recognized speaker on the topics of venture capital investing and entrepreneurship. Jason Mendelson has over a decade of experience in the venture capital and technology industries in a multitude of investing, operational, and engineering roles. Prior to cofounding Foundry Group, he was a managing director and general counsel for Mobius Venture Capital, where he also acted as its chief administrative partner overseeing all operations of the firm. Mendelson was also an attorney with Cooley LLP, where he practiced corporate and securities law with an emphasis on representation of emerging companies in private and public financings as well as mergers and acquisitions.
Loading...
or
Not Currently Available for Direct Purchase