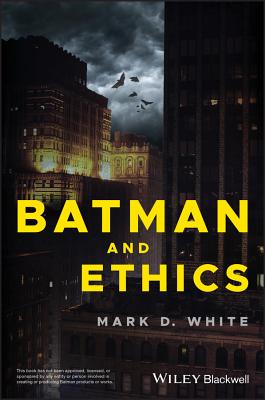 Batman has been one of the world's most beloved superheroes since his first appearance in Detective Comics #27 in 1939. Clad in his dark cowl and cape, he has captured the imagination of millions with his single-minded mission to create a better world for the people of Gotham City by fighting crime, making use of expert detective skills, high-tech crime-fighting gadgets, and an extensive network of sidekicks and partners. But why has this self-made hero enjoyed such enduring popularity? And why are his choices so often the subject of intense debate among his fans and philosophers alike?

Batman and Ethics goes behind the mask to shed new light on the complexities and contradictions of the Dark Knight's moral code. From the logic behind his aversion to killing to the moral status of vigilantism and his use of torture in pursuit of justice (or perhaps revenge), Batman's ethical precepts are compelling but often inconsistent and controversial. Philosopher and pop culture expert Mark D. White uses the tools of moral philosophy to track Batman's most striking ethical dilemmas and decisions across his most prominent storylines from the early 1970s through the launch of the New 52, and suggests how understanding the mercurial moral character of the caped crusader might help us reconcile our own.

A thought-provoking and entertaining journey through four decades of Batman's struggles and triumphs in time for the franchise's 80th anniversary, Batman and Ethics is a perfect gateway into the complex questions of moral philosophy through a focused character study of this most famous of fictional superheroes.

MARK D. WHITE is the chair of the Department of Philosophy at the College of Staten Island/CUNY, where he teaches courses in philosophy, economics, and law. He is editor or co-editor of a number of books in the Blackwell Philosophy and Pop Culture series, including Batman and Philosophy (Wiley Blackwell, 2009) with Robert Arp, and is the author of The Virtues of Captain America (Wiley Blackwell, 2014). He has also written, edited, and co-edited a number of academic books in philosophy, economics, and law and has authored many articles and book chapters in these areas.
Loading...
or
Not Currently Available for Direct Purchase