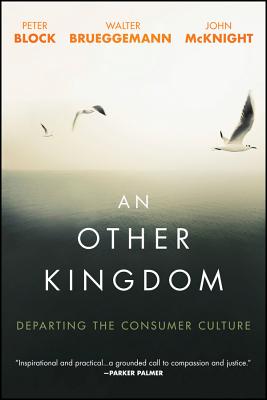 Our seduction into beliefs in competition, scarcity, and acquisition are producing too many casualties. We need to depart a kingdom that creates isolation, polarized debate, an exhausted planet, and violence that comes with the will to empire. The abbreviation of this empire is called a consumer culture.

We think the free market ideology that surrounds us is true and inevitable and represents progress. We are called to better adapt, be more agile, more lean, more schooled, more, more, more. Give it up. There is no such thing as customer satisfaction.

We need a new narrative, a shift in our thinking and speaking. An Other Kingdom takes us out of a culture of addictive consumption into a place where life is ours to create together. This satisfying way depends upon a neighborly covenant--an agreement that we together, will better raise our children, be healthy, be connected, be safe, and provide a livelihood. The neighborly covenant has a different language than market-hype. It speaks instead in a sacred tongue.

Authors Peter Block, Walter Brueggemann, and John McKnight invite you on a journey of departure from our consumer market culture, with its constellations of empire and control. Discover an alternative set of beliefs that have the capacity to evoke a culture where poverty, violence, and shrinking well-being are not inevitable--a culture in which the social order produces enough for all. They ask you to consider this other kingdom. To participate in this modern exodus towards a modern community. To awaken its beginnings are all around us. An Other Kingdom outlines this journey to construct a future outside the systems world of solutions.

Peter Block (Cincinnati, OH; www.peterblock.com; www.designedlearning.com) is a leading consultant and bestselling author whose work is about empowerment, stewardship, chosen accountability, and the reconciliation of community. He is a partner in Designed Learning, a training company that offers workshops designed by Peter to build the skills outlined in his books. He received a Masters Degree in Industrial Administration from Yale in 1963. He has received national awards for outstanding contributions in the field of training and development, including the American Society for Training and Development Award for Distinguished Contributions; the Association for Quality and Participation President's Award; and Training Magazine HRD Hall of Fame. Walter Brueggemann (Cincinnati, OH; www.walterbrueggemann.com) is one of the most influential Old Testament scholars of the last several decades, known throughout the world for his method of combining literary and sociological modes when reading The Bible. He has written more than 58 books, hundreds of articles, and several commentaries on books of the Bible, has contributed to the Living the Questions DVD series, and participated in Bill Moyers' PBS television series on Genesis. John McKnight (Evanston, IL) is emeritus professor of education and social policy and co-director of the Asset-Based Community Development Institute at Northwestern University. He is the coauthor of Building Communities from the Inside Out and the author of The Careless Society.
Loading...
or support indie stores by buying on