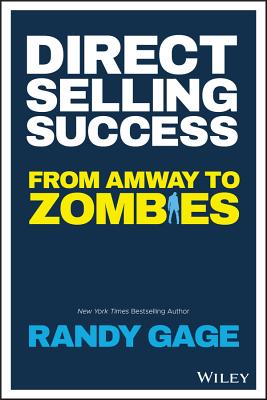 From Amway to Zombies

Randy Gage revolutionized the Direct Selling profession with the bestselling phenomenon How to Build a Multi-Level Money Machine, translated into more than 20 languages. Now he's at it again with the long-waited sequel: Direct Selling Success. This all-new book is the ultimate textbook on creating success in the business. You'll learn everything from choosing the right company, finding the best candidates, becoming a rock star recruiter--to advanced skills like making powerful presentations, becoming a leader, and creating a leadership factory on your team.

Since Randy's previous book took the profession by storm, there have been significant changes to the business that demand a fully up-to-date sequel: Regulatory oversight of the industry has increased dramatically, it's now much trickier to make simple product or income claims, and distributors are hungry for the right information on how to get it done. The business model has gained widespread public acceptance--it's now common for industry companies to secure naming rights for sports arenas and sponsor major league teams. Even Warren Buffet and Forbes Magazine promote the business. More and more people are taking on side hustles and are considering or already in the business.Maybe the biggest change is the impact of e-commerce, social media, and mobile apps on the business today. Randy's up-to-the-minute book explains how you can become successful in this new environment. The need for expert, proven guidance on the Direct Selling and Network Marketing profession has never been greater than right now. Direct Selling Success will help you:

The Direct Selling industry continues to experience robust growth. The opportunity to generate passive income and create complete financial freedom is immense under current conditions. Direct Selling Success is a must-have resource for anyone who wants to build a team of customers and distributors that will generate residual income for years to come.

If you want to reach success in Direct Selling, there is probably no one on earth better qualified to help you than RANDY GAGE. An icon of the profession, Randy helped launch the business in many developing countries and has trained the top income-earners in dozens of companies. He has arguably mentored more million-dollar producers than anyone alive today. Most importantly, Randy teaches from real-world experience, having earned millions of dollars as a distributor and building a team of more than 200,000 people. In 2014, Randy was the first person inducted into the Direct Selling Hall of Fame. He is the author of 11 books translated into 25 languages, including the New York Times bestsellers, Risky Is the New Safe and Mad Genius. Randy has spoken to more than two million people across more than 50 countries and has also been inducted into the Speakers Hall of Fame. When he is not prowling the platform or locked in his lonely writer's garret, you'll probably find him playing third base for a softball team somewhere.
Loading...
or support indie stores by buying on