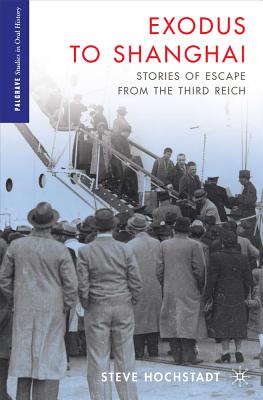 Of the 400,000 German-speaking Jews that escaped the Third Reich as refugees, approximately 16,000 ended up in Shanghai, China, as part of one of the more remote enclaves within the Jewish diaspora. The stories of the Shanghai Jews contain extremes of the suffering and endurance that defined the refugee experience. Nobody wanted to go to China, and because Shanghai was the last choice of refugees, those who went there had nowhere else left to go. They had endured every stage of escalating Nazi persecution, including the mass arrests during Kristallnacht, the real beginning of the Holocaust. This groundbreaking oral history volume is based on 20 years of interviews with over 100 former Shanghai refugees. It offers a moving and at times astonishing collective portrait of courage, culture shock, persistence, and enduring hope in the face of unimaginable hardships.

Praise For Exodus to Shanghai: Stories of Escape from the Third Reich (Palgrave Studies in Oral History)…

"I have been waiting for this book for decades. The heroic escape to Shanghai during the Holocaust is the least known chapter of the Holocaust experience. Steve Hochstadt, the author of Exodus to Shanghai, does not merely cite statistic but provides a face to this remarkable experience. The author is to be commended for including a superb bibliography of primary and secondary sources, films, maps, charts, and photos. If there is one book to read about the Jewish experience in Shanghai, this is the one." - The Jewish Book Council


"A clear and engaging treatment of a little-known topic." - Asian Review of Books

"Deftly weaving in the personal and political, Steve Hochstadt tells an absorbing story of some 16,000 Central European Jewish refugees who fled the Nazis. The singular value of Exodus to Shanghai is that it relies on the personal testimonies of one hundred refugees Hochstadt managed to locate. What he does best is thoroughly set the stage from the panicky departure of men, women and children from Nazi Europe to life in Shanghai and eventual dispersion to the few countries that would have them." - History News Network


"Shanghai was one of the major safe havens for Jews fleeing Nazi Germany. In China Jews built a vibrant community, a testament to their indomitable determination not just to survive, but to live full and complete lives. Steve Hochstadt tells their story through a remarkable collection of interviews gathered over many years and his own insightful commentary. Exodus to Shanghai is a great book that reveals a little-known aspect of the fate of Jews under Nazi persecution." - Eric D. Weitz, Dean of Humanities and the Arts at City College, City University of New York

"The book is extremely significant for several reasons. Despite the fact that increasingly Shanghai refugees are writing memoirs, there is as yet no collection of interviews. Whereas we have many interviews of Holocaust survivors, the lack of direct statements by Shanghai survivors is indeed glaring. Yet Shanghai refugees must be also considered Holocaust survivors, having barely escaped certain death. Therefore, this book is highly significant and its quality as a direct and immediate account is indisputable. It will be a valuable contribution to a growing field of inquiry and information and will at last give these former refugees a voice in the ongoing discourse on the Holocaust." - Irene Eber, Louis Frieberg Professor of East Asian Studies, the Hebrew University of Jerusalem

STEVE HOCHSTADT is a Professor of History at Illinois College, USA. His books include Sources of the Holocaust (Palgrave, 2004).
Loading...
or support indie stores by buying on