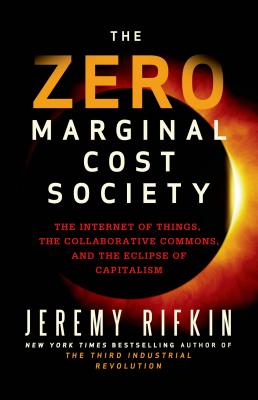 In The Zero Marginal Cost Society, New York Times bestselling author Jeremy Rifkin describes how the emerging Internet of Things is speeding us to an era of nearly free goods and services, precipitating the meteoric rise of a global Collaborative Commons and the eclipse of capitalism.

Rifkin uncovers a paradox at the heart of capitalism that has propelled it to greatness but is now taking it to its death—the inherent entrepreneurial dynamism of competitive markets that drives productivity up and marginal costs down, enabling businesses to reduce the price of their goods and services in order to win over consumers and market share. (Marginal cost is the cost of producing additional units of a good or service, if fixed costs are not counted.) While economists have always welcomed a reduction in marginal cost, they never anticipated the possibility of a technological revolution that might bring marginal costs to near zero, making goods and services priceless, nearly free, and abundant, and no longer subject to market forces.

Now, a formidable new technology infrastructure—the Internet of things (IoT)—is emerging with the potential of pushing large segments of economic life to near zero marginal cost in the years ahead. Rifkin describes how the Communication Internet is converging with a nascent Energy Internet and Logistics Internet to create a new technology platform that connects everything and everyone. Billions of sensors are being attached to natural resources, production lines, the electricity grid, logistics networks, recycling flows, and implanted in homes, offices, stores, vehicles, and even human beings, feeding Big Data into an IoT global neural network. Prosumers can connect to the network and use Big Data, analytics, and algorithms to accelerate efficiency, dramatically increase productivity, and lower the marginal cost of producing and sharing a wide range of products and services to near zero, just like they now do with information goods.

The plummeting of marginal costs is spawning a hybrid economy—part capitalist market and part Collaborative Commons—with far reaching implications for society, according to Rifkin. Hundreds of millions of people are already transferring parts of their economic lives to the global Collaborative Commons. Prosumers are plugging into the fledgling IoT and making and sharing their own information, entertainment, green energy, and 3D-printed products at near zero marginal cost. They are also sharing cars, homes, clothes and other items via social media sites, rentals, redistribution clubs, and cooperatives at low or near zero marginal cost. Students are enrolling in free massive open online courses (MOOCs) that operate at near zero marginal cost. Social entrepreneurs are even bypassing the banking establishment and using crowdfunding to finance startup businesses as well as creating alternative currencies in the fledgling sharing economy. In this new world, social capital is as important as financial capital, access trumps ownership, sustainability supersedes consumerism, cooperation ousts competition, and "exchange value" in the capitalist marketplace is increasingly replaced by "sharable value" on the Collaborative Commons.

Rifkin concludes that capitalism will remain with us, albeit in an increasingly streamlined role, primarily as an aggregator of network services and solutions, allowing it to flourish as a powerful niche player in the coming era. We are, however, says Rifkin, entering a world beyond markets where we are learning how to live together in an increasingly interdependent global Collaborative Commons.


Praise For The Zero Marginal Cost Society: The Internet of Things, the Collaborative Commons, and the Eclipse of Capitalism…

“Admirable in its scope...what makes The Zero Marginal Cost Society worth reading is its audacity, its willingness to weave a vast string of developments into a heartening narrative of what our economic future may hold for the generations to come. You can call it naive, but it's much more than that. It's hopeful.” —Fortune

“A thought-provoking read that pushes some of the most important new technologies to their logical–and sometimes scary–conclusions…The value of this book… doesn't lie in the accuracy of its specific forecasts, but rather in the extrapolations of current trends that enable Rifkin to reach them. If Rifkin's predictions have value... it is in bringing home the extent of the technologically induced upheaval that may lie ahead. How we deal with the consequences is up to us. A grand unifying theory of [Rifkin's] thinking over four decades.” —The Financial Times

“[An] illuminating new book…Rifkin is very good on the historical origins of the giant, vertically integrated organizations that dominated the 20 Century economy. [He] makes a powerful case that from a longer-term perspective, it is these giant hierarchies that are the anomalies of economic history. The shredding of vertical value chains, the creation of vast new horizontal value chains, and the social change of people preferring access to ownership…bring massive economic and social changes to business and society, the implications of which [are] only beginning to be glimpsed. For Rifkin, the shifts are positive and huge.” —Forbes

“Jeremy Rifkin offers an ambitious and optimistic image of how a commons-based, collaborative model of the economy could displace industrial capitalism when the economic and social practices of the Internet are extended to energy, logistics, and material fabrication. Even skeptical readers, concerned with the ubiquitous surveillance and exquisite social control that these same technologies enable, should find the vision exhilarating and its exposition thought provoking.” —Yochai Benkler, Harvard Law School

“This breathtaking book connects some of today's most compelling technology-driven trends into a five-hundred-year spiral from commons to capitalism and back. Rifkin has produced an intellectual joyride that takes us to the threshold of a new economic order.” —Kevin Werbach, the Wharton School

“The Zero Marginal Cost Society confirms Jeremy Rifkin as the peerless visionary of technological trends. The future arrives only to fill in the sketches that Rifkin so ably draws. I highly recommend this book as a cure for those who are perplexed about the future of technology.” —Calestous Juma, John F. Kennedy School of Government, Harvard University

“In his latest work, Jeremy Rifkin turns his gaze on the world in which almost everything has a marginal cost approaching zero, asking what the implications are for our economy and the environment. Rifkin's radical conclusions--foretelling the eclipse of our current economic system and the rise of the "collaboratists"--will make this one of the most discussed books of the year.” —James Boyle, the Center for the Study of the Public Domain, Duke Law School

“Jeremy Rifkin takes us on a whirlwind tour of our past and future, making the undeniable case for our growing, global collaborative destiny. I dare you to read this book and not rethink your future!” —Lisa Gansky, author of The Mesh: Why the Future of Business is Sharing

“A comprehensive exploration of the implications of anyone being able to make anything” —Neil Gershenfeld, Director, MIT Center for Bits and Atoms

“An amazing work…This insightful, surprising, and practical book helps us understand how the emerging Internet of Things is driving extreme productivity, the rush to a near zero marginal cost society, and the rise of a new economic paradigm. Rifkin solves the puzzle of what companies, nonprofit organizations, and governments need to do to reposition themselves on the new Collaborative Commons. The book is a must read for every citizen and decision maker.” —Jerry Wind, the Wharton School

“Free-market traditionalists have trouble recognizing that the future of governance and economics lies with the Commons--a world of collaboration, sharing, ecological concern and human connection. Jeremy Rifkin deftly describes the powerful forces that are driving this new paradigm and transforming our personal lives and the economy. A highly readable account of the next big turn of the wheel.” —David Bollier, author of Think Like a Commoner: A Short Introduction to the Life of the Commons

“Brilliantly tackled…Rifkin describes how the dramatic lowering of transaction, communication, and coordination costs allow the global scaling of small group dynamics, fundamentally changing the choices that humanity can make for its social organization. Read it, rejoice, and take action to build the new world in which the market and the state are not destroying the commons, but aligned with it.” —Michel Bauwens, Founder, P2P Foundation

“Jeremy Rifkin has always been ahead of the curve. In The Zero Marginal Cost Society, Rifkin takes us on a journey to the future, beyond consumerism to "prosumers" who produce what they consume and share what they have on a Collaborative Commons, a contemporary expression of Gandhi's "Swadeshi." His down to earth vision of democratizing innovation and creativity on a global scale, for the wellbeing of all, is inspiring and, equally important, doable.” —Vandana Shiva, Environmental Activist and recipient of the Right Livelihood Award

Jeremy Rifkin is president of the Foundation on Economic Trends and the author of more than fifteen bestselling books, including The Hydrogen Economy and The End of Work. He has been a guest on Face the Nation, The Lehrer News Hour, 20/20, Larry King Live, Today, and Good Morning America. The National Journal named Rifkin as one of 150 people in the U.S. that have the most influence in shaping federal government policy. He has also testified before numerous congressional committees, and since 1994, Mr. Rifkin has been a senior lecturer at the Wharton School’s Executive Education Program at the University of Pennsylvania.

Rifkin is chairman of the Global CEO Business Roundtable, which includes IBM, Cisco, Cushman and Wakefield, and has served as an adviser to various global leaders, including Nicolas Sarkozy of France and Angela Merkel of Germany. His monthly column on global issues appears in many of the world’s leading newspapers and magazines, including The Los Angeles Times, The Guardian in the U.K., Die Süddeutsche Zeitung in Germany, Trud in Bulgaria, Clarín in Argentina, and Al-Ittihad in the U.A.E. He lives in Bethesda, MD.