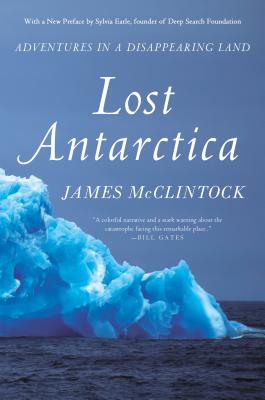 Adventures in a Disappearing Land (MacSci)

Few of us will ever get to Antarctica. The bitter cold and three months a year without sunlight makes the sixth continent virtually uninhabitable for humans. Yet marine biologist James B. McClintock has spent three decades studying the frozen land in order to understand better the world that lies beneath it. In this luminous and closely observed account, one of the world's leading experts on Antarctica introduces the reader to this fascinating world—the extraordinary wildlife that persists despite the harsh conditions and the way each of the pieces fit into the puzzle of the intricate environment: from single-celled organisms to baleen whales, with leopard seals, penguins, 50-foot algae, sea spiders, coral, and multicolored sea stars, in between. Now, as temperatures rise, the fragile ecosystem is under attack. Adélie penguins that have successfully nested on Antarctic islands for several hundred years have been nearly wiped out. King crabs that used to populate the deep seafloor are moving into shallower waters, disturbing the set order of life there. Lost Antarctica is an appeal to understand and appreciate the wondrous place at the bottom of the world that we are on the brink of losing.

Praise For Lost Antarctica: Adventures in a Disappearing Land (MacSci)…

“A veteran of the extreme south, McClintock shares the otherworldly wonders unveiled by decades of research. The book is packed with joys.” —Nature

“A close look at the life of a scientist in a strange wilderness for months at a time, and a revelatory exploration of the region's unique wildlife… McClintock is a determined, evenhanded guide.” —Smithsonian magazine

“Writing with real passion about this "desolate but beautiful" place, almost twice the size of Australia, McClintock describes the dangers of working there, but also the wonder.” —The Guardian

“A richly informative memoir from a veteran scientist who has devoted his career to Antarctica . . . Entertaining natural history.” —Kirkus Reviews

“With rare clarity, humor, high adventure and deep, sobering insight, gifted scientist-explorer-writer James McClintock shares decades of experience on, around and under the wildest ocean on Earth. Every person alive should read- and heed- this riveting account of the swift changes now sweeping Antarctica – and the world. If Indiana Jones were a marine biologist, he would aspire to be James McClintock.” —Sylvia Earle, National Geographic Explorer-in-Residence and founder of Deep Search

“James B. McClintock's Lost Antarctica is a disturbing distress signal about the traumas and strains of the South Pole in the Age of Global Warming. McClintock is a marvelous writer with a keen eye for the natural world. His knowledge of polar science is exemplary. Highly recommended!” —Douglas Brinkley author of The Quiet World and The Wilderness Warrior

“Lost Antarctica is a very original, readable, and authoritative introduction to a little known part of Earth's natural environment, and has increasing threat to its existence.” —Edward O. Wilson

“Lost Antarctica is an intimate tour of a rapidly changing continent, led by one of the scientists who knows it best. James McClintock has written an important and timely book.” —Elizabeth Kolbert

“James McClintock shares his deep love of Antarctica vividly in this colorful narrative. He issues a stark warning about the catastrophe facing this remarkable place - and our globe - from the twin dangers of climate change and ocean acidification. Lost Antarctica reminds us of the urgency of finding new energy systems that do not use our atmosphere or oceans as a waste dump.” —Bill Gates

“Jim McClintock takes us with him on an extraordinary field trip to Antarctica, the frigid part of the Garden of Eden. With superb descriptions of the ice and biosphere of the great white continent, he carefully documents how climate change is having a big impact on the penguins, seals and other sea creatures that inhabit the polar waters.” —Henry Pollack, Ph.D., author of A World without Ice

“Jim McClintock is a great scientist and explorer/naturalist in the tradition of Darwin and Wilson. The stories he tells are fascinating in their scientific detail and recollections, and cautionary in their implications.” —Hugh Ducklow, PhD. Director of the Ecosystems Center at the Marine Biological Laboratory (MBL) at Woods Hole, Massachusetts

James McClintock is one of the world's foremost experts on Antarctica, and currently the Endowed University Professor of Polar and Marine Biology at the University of Alabama at Birmingham. He is the author of Lost Antarctica. McClintock has appeared on local, national, and international public radio, CNN news, and the Weather Channel. He has been quoted in National Geographic, Discover Magazine, The Los Angeles Times, Chicago Tribune, The Wall Street Journal, and others. Each year he leads a philanthropic cruise to the Antarctic Peninsula, sponsored by Abercrombie and Kent. McClintock Point , a body of land on the north side of the entrance of Explorer's Cove on the Scott Coast of the Ross Sea, Antarctica, was named in honor of his research.
Loading...
or
Not Currently Available for Direct Purchase