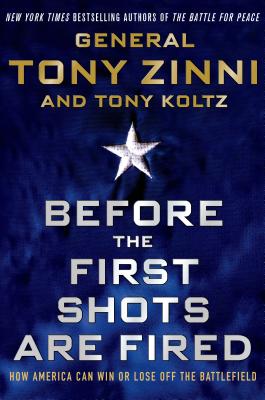 Before the First Shots Are Fired (Hardcover)

How America Can Win Or Lose Off The Battlefield

For the better part of the last half century, the United States has been the World's Police, claiming to defend ideologies, allies, and our national security through brute force. But is military action always the most appropriate response? Drawing on his vast experience, from combat in Vietnam to peacekeeping in Somalia, to war games in Washington, DC and negotiations with former rebels in the Philippines, retired four-star General Tony Zinni argues that we have a lot of work to do to make the process of going to war—or not—more clear-eyed and ultimately successful. He examines the relationship between the executive and the military (including the difference between passive and engaged presidents); the failures of the Joint Chief of Staff; the challenges of working with the UN, coalition forces, and NATO; the difference between young, on the ground officers and less savvy senior leaders; the role of special forces and drone warfare; and the difficult choices that need to be made to create tomorrow's military. Among his provocative points:
* Virtually every recent American military operation follows a disconnected series of actions that lead to outcomes we never foresaw or intended.
* We need to assign accountability for the political decisions that can make or break a mission.
* Words and ideas are as important to victory in today's conflicts as bullets.
* The cyber "war" is ongoing. Either you must build better tech than the other guy, or you must steal it.
* Our foreign aid budget is pitiful, our State Department, USAID, and the other government agencies that we critically need to be on a par with our military are underfunded, undermanned, and poorly structured for their current objectives.
From the Oval Office to the battlefield, Before the First Shots Are Fired is a hard-hitting analysis of the history of America's use of military action and a spirited call for change.

General Tony Zinni (Ret.) was Commander in Chief of CENTCOM and special envoy to the Middle East. He has appeared on 60 Minutes, Nightline and Charlie Rose, among others.

Praise For Before the First Shots Are Fired: How America Can Win Or Lose Off The Battlefield…

“A useful guide for anticipating the complexities of the modern battlefield.” —Kirkus Reviews
or
Not Currently Available for Direct Purchase
Copyright © 2020 American Booksellers Association