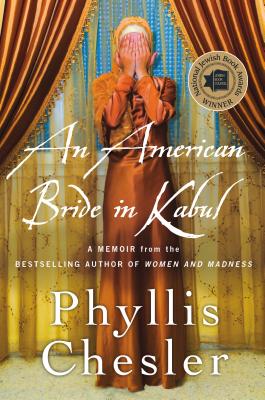 An American Bride in Kabul

Few westerners will ever be able to understand Muslim or Afghan society unless they are part of a Muslim family. Twenty years old and in love, Phyllis Chesler, a Jewish-American girl from Brooklyn, embarked on an adventure that has lasted for more than a half-century. In 1961, when she arrived in Kabul with her Afghan bridegroom, authorities took away her American passport. Chesler was now the property of her husband's family and had no rights of citizenship. Back in Afghanistan, her husband, a wealthy, westernized foreign college student with dreams of reforming his country, reverted to traditional and tribal customs. Chesler found herself unexpectedly trapped in a posh polygamous family. She fought against her seclusion and lack of freedom, her Afghan family's attempts to convert her from Judaism to Islam, and her husband's wish to permanently tie her to the country through childbirth. Drawing upon her personal diaries, Chesler recounts her ordeal, the nature of gender apartheid—and her longing to explore this beautiful, ancient, and exotic country and culture. An American Bride in Kabul re-creates a time gone by, a place that is no more, and shares the way in which Chesler turned adversity into a passion for world-wide social, educational, and political reform.

Praise For An American Bride in Kabul: A Memoir…

“Engrossing...Chesler adroitly blends her personal narrative with a riveting account of Afghanistan's troubled history, the ongoing Islamic/Islamist terrorism against Muslim civilians and the West, and the continuing struggle and courage of Afghan feminists.” —Publishers Weekly

“No human culture compromises the rights of women more than Islam. Today over 700 million women are directly or indirectly affected by the Koran and the teachings of Mohammed. Phyllis Chesler is by far the bravest and most outspoken American feminist to address the plight of Muslim women. In this book she shares with the reader her first encounter with Islam in Afghanistan. It is a moving account of the harrowing experience of one woman who almost meets her death in a culture that could not be more alien to her American upbringing. Yet every page is laden with compassion and love for the ex-husband and his family she unwittingly joined. I recommend this book be put on the reading list of every American school.” —Ayaan Hirsi Ali, Author of Infidel and Nomad

“Boom. Suddenly Phyllis Chesler is a prisoner in Afghanistan. Without a passport. As a wife without rights of any kind. Her bridegroom, once her equal when they met in New York, now in his own land, is a stranger…she is in an utterly male society where women and children are a man's property--"his to protect or abuse. They are his to kill. It is the way things are." This is disconcerting to say the least…She escapes. This is how it all started. This is a bold book; intimate and rich in detail; as revealing a story about class, gender and religious differences as one will find. Chesler is a voice crying out for women. She had the right training. She will never stop.” —Kate Millett, author of Sexual Politics and Going to Iran

“This is a wondrous, invaluable memoir and meditation on women, culture, history, and the meaning of freedom. Phyllis Chesler tells a moving story in a direct, unaffected style and is able to draw conclusions of a wider import: reflections on the complex interplay of culture, more complex than the cliché of "a clash of cultures." Chesler is remarkably generous to her husband. In trying to understand him, she is able to tease out valuable historical and cultural lessons. After fifty years of reflection, Chesler is able to distil mature and wise judgments from her dramatic experience, on the persecution and suffering of Muslim women. Chesler's own feminism really began with these experiences in Afghanistan. One of the other merits of the book is her introduction to the reader of a whole host of writers, travelers, and diplomats who have written perceptively about Islamic countries in general but on Afghanistan in particular, especially the treatment of women and slaves.” —Ibn Warraq, author of Why I am Not Muslim and Defending the West: A Critique of Edward Said's Orientalism

“With a deft pen and a half-century of experience, Chesler revisits her brief, unpleasant, but life-changing and ultimately precious time in an Afghan harem. Although hardly the only feisty Western woman to despair at finding, on their visiting his home country, her debonair Muslim husband turned into an unrecognizably primitive tyrant, she drew unique benefits from the experience. These included finding her career focus (feminism), her field of study (psychology), her world outlook (principled liberalism) –and this marvelous book.” —Daniel Pipes, Director of the Middle East Forum, author of In the Path of God: Islam and Political Power.

“In her fascinating new memoir, Phyllis Chesler offers a vivid account of landing in Afghanistan in 1961 as a young bride – and finding herself a victim and virtual prisoner of that country's cruel anti-women customs and habits. Ms. Chesler was only 20, the product of a sheltered Orthodox Jewish household in Brooklyn, when she married a fellow student, a Muslim who came from a prominent Kabul family. Her companion was seductive, exotic, alluring, and seemed to promise her the world. But Ms. Chesler, who would go on to become a famous feminist leader and the author of the classic Women and Madness, attributes some of her later accomplishments, including her passionate stance on behalf of women, to insights she gained in that period. She finds herself trapped in a household replete with madness, including a mother-in-law who is sadistic and punitive and a husband who emerges as mean and uncaring. Despite her in-laws' wealth, she is often hungry, denied the foods that she can eat, and she can't even go out on her own to see a country she had longed to explore. Stripped of her U.S. passport when she landed, she finds her movements severely restricted. Many of the book's insights about 1961 Kabul seem oddly relevant to Kabul in 2013 – a culture that, if possible, has become even more heinous to women with the advent of the Taliban. This is an eye-opening work.” —Lucette Lagnado, author of The Man in the White Sharkskin Suit and The Arrogant Years

“With An American Bride in Kabul, Phyllis Chesler, brilliantly brings to life the plight of so many Muslim women helplessly trapped in the prison which is Islamist misogyny. Through the eyes of her innocent and insightful Brooklyn girl, Chesler provides humanity a service--a window into the internal workings of the male-dominated Islamist familial conspiracy against women. Her story is believable because it is sadly repeated millions of times around the globe. A must read, An American Bride will leave readers finally able to feel the powerlessness which overwhelms Muslim women who are victims of honor abuse and violence. Readers will leave understanding like so many Muslim reformers already do that Islamist misogyny is a Muslim problem that needs Muslim solutions.” —M. Zuhdi Jasser, MD, President, American Islamic Forum for Democracy, author of The Battle for the Soul of Islam: An American Muslim Patriot's Fight to Save His Faith.

“I love this book and could not put it down. It is the romantic and riveting story of a young woman from the orthodox Jewish neighborhood of Borough Park, who rebelled against a sheltered life in which women were religiously dominated by men and who then traveled to Afghanistan where she saw women who were far more oppressed and who lived under conditions of polygamy, purdah, poverty, and the burqa. This journey sowed the seeds of a very American feminism. We learn about other westerners, especially women, who travelled this route and we learn about the ancient history of the Afghan Jewish community. This book has the power to inspire a new kind of interfaith dialogue. Book club members will discuss this work for a good long time.” —Rivka Haut, Author and Orthodox agunah activist, Co-Editor of Daughters of the King: Women and the Synagogue, Co-Editor of Women of the Wall, and Co-Editor of Shaarei Simcha Gates of Joy

“I loved every second of reading Chesler's amazing book. Kudos to her for standing in her truth. An American Bride in Kabul is a very courageous piece of work and I am in awe of Phyllis Chesler's determination to tell the truth of her experience, a truth which confirms the stories of so many Muslim women. I couldn't stop reading this book and felt Phyllis's powerful words grabbing my heart and opening up the deep emotions. A must read!” —Soraya Miré, Author of The Girl With Three Legs

“Phyllis Chesler's An American Bride in Kabul is the most compelling autobiography I have read in a long time. It not only vividly tells us about women's lives in Afghanistan from the perspective of an American woman, but more importantly how and why American women fall into the trap of an Islamic marriage.” —Nonie Darwish, author of The Devil We Don't Know: The Dark Side of Revolutions in the Middle East

“Phyllis Chesler's brilliant and courageous memoir will resound in your heart and mind long after you turn the final page. Dr. Chesler, an American Jewish woman, escaped from starvation and isolation in Afghanistan--and came close to death in the process. Perhaps most inspiring is Dr. Chesler's voyage in using those unimaginable experiences as a springboard to become a leader of women's rights around the globe. Her decades of academic and professional work advocating for women who cannot cry out for themselves is a tremendous legacy: the seeds of this deep calling were sown in Afghanistan and are now recounted here in this moving and marvelous book.” —Sara Aharon, author of Kabul to Queens: The Jews of Afghanistan and Their Move to the United States

“Chesler pens a cautionary tale of the perils of far-flung passion and the hazards of romantic exoticism. In precise, pungent and, at times, granular detail, she summons a world festooned by fantasy and myth. In An American Bride in Kabul, she gives full-throated voice to the beguilements of the East, etching a portrait-in-the-round, at once grand and engrossing.” —Michael Skakun, author of On Burning Ground: A Son's Memoir

“Phyllis Chesler's newest book is rich and operatic, taking us into a world few of us have known about, telling us in descriptive, historical, political, religious, and deeply personal detail things that can transform our ways of thinking and feeling about everything from interpersonal dynamics to global politics. And this book illuminates one major reason she has for decades been the insightful, ardent, tireless feminist educator and activist she became.” —Paula J. Caplan, Ph.D., Harvard University psychologist and author of, among others, The Myth of Women's Masochism and Don't Blame Mother

Phyllis Chesler is an emerita professor of Psychology and Women's Studies at City University of New York, bestselling author of Women and Madness, legendary feminist leader, and psychotherapist. Dr. Chesler has appeared on CNN, Fox News, The O’Reilly Factor, The Today Show, Oprah, and multiple NPR programs, including NPR’s At the Opera.
Loading...
or support indie stores by buying on