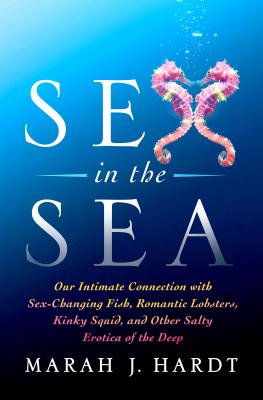 Sex in the Sea

Our Intimate Connection with Sex-Changing Fish, Romantic Lobsters, Kinky Squid, and Other Salty Erotica of the Deep

Beyond a deliciously voyeuristic excursion, Sex in the Sea uniquely connects the timeless topic of sex with the timely issue of sustainable oceans. Through overfishing, climate change, and ocean pollution we are disrupting the creative procreation that drives the wild abundance of life in the ocean. With wit and scientific rigor, Hardt introduces us to the researchers and innovators who study the wet and wild sex lives of ocean life and offer solutions that promote rather than prevent, successful sex in the sea. Part science, part erotica, Sex in the Sea discusses how we can shift from a prophylactic to a more propagative force for life in the ocean.


Praise For Sex in the Sea: Our Intimate Connection with Sex-Changing Fish, Romantic Lobsters, Kinky Squid, and Other Salty Erotica of the Deep…

“Whether readers are new to the marine sciences or possess prior knowledge, they will find much to learn in this well-written and delightful study.” —Library Journal, starred review

"Funny and entertaining...but it is also a warning. Misunderstanding the mating habits and needs of sea life poses great risks to our own way of life." —The Miami Herald

"In Sex in the Sea, Marah J. Hardt, research co-director of the nonprofit Future for Fish, gathers tales of marine love that are often as hilarious as they are disturbing." —New York Post

"[Hardt's] fascination with the sheer variety and kinkiness of sex in the ocean is unbounded." —Sierra

"Hardt’s writing is often spectacular at describing the rituals and courtships of underwater reproduction...It’s descriptions like these—luxurious and strange—that help drive Hardt’s book." —The New Republic

"A voyeuristic romp." —The Economist

"A watery romp under the waves that will appeal to anyone wanting to broaden their knowledge of our watery planet." —Kirkus Reviews

"Hilarious...Hardt’s science is up to date in a field where research can be difficult, and readers will feel confident that they can talk intelligently about fish gonads at their next sushi dinner." —Publisher's Weekly

“I think it was W.C. Fields who famously said 'I don’t drink water. Fish have sex in it.' As Marah J. Hardt tells it in this captivating, tell-all account, for quite a few sea creatures that’s the whole point. Sex in the Sea is a highly entertaining, exhilarating book and a wonderfully fresh take on the amazing biodiversity beneath the waves." —Sir Richard Branson, Founder of the Virgin Group

"Sex and the sea are both deeply mysterious. The combination of the two is explosive and makes for a terrific yarn.” —Paul Greenberg, bestselling author of Four Fish and American Catch

"Sex in the City can't hold a candle to Marah Hardt's saucy and scholarly Sex in the Sea." Nancy Knowlton, author of Citizens of the Sea

“Marah Hardt has written a kinky romp through the sea—a book that should earn marine biology an X rating.” —Carl Zimmer, author of A Planet of Viruses

"Hardt reveals the curious mysteries of marine sex life in fascinating ways...Do yourself a favor and dive into this gem of a book!" —aimeejustonemorepage.wordpress.com

Dr. Marah J. Hardt is Research Co-Director for the non-profit Future of Fish. A coral reef ecologist by training, she is a former research fellow at Blue Ocean Institute. She has written for Scientific American, The American Prospect, and Scuba Diver Magazine, among other publications. She currently embraces life as a mermaid in the mountains of Boulder, CO.
Loading...
or
Not Currently Available for Direct Purchase