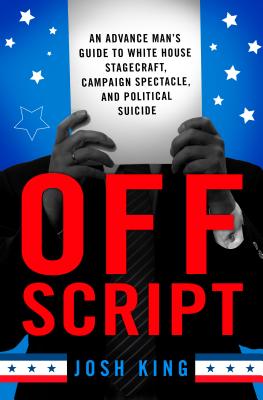 Donald Trump won election as the 45th President of the United States by studying American political stagecraft and learning what helped previous candidates succeed and doomed others to failure. A figure on the periphery of campaigns for decades, he glided down the Trump Tower escalator on June 16, 2015, declared his candidacy and took his place, permanently, as an actor in the country’s greatest spectacle.

Twenty-eight years earlier, at the dawn of what Josh King calls “The Age of Optics” in OFF SCRIPT: An Advance Man’s Guide to White House Stagecraft, Campaign Spectacle and Political Suicide, Trump began to position himself for his eventual run for the Oval Office. Pictured at the foot of that same gilded escalator, he posed at the foot of that same escalator for a cover story profile in TIME magazine. “This Man May Turn You Green With Envy—Or Just Turn You Off,” read the first part of TIME’s headline in January 1989. “Flaunting It is the Game, and TRUMP is the name,” the headline concluded.

The cover story came just after Massachusetts Governor Mike Dukakis lost in a landslide to Vice President George H.W. Bush, in part because Dukakis made the disastrous decision to ride in an M1A1 Abrams tank in Sterling Heights, Michigan less than two months before the election. Why did Dukakis make that ride, and why was it so deadly? Indeed, in each election that followed, why did George Bush, Bob Dole, Al Gore, John Kerry, John McCain and Mitt Romney make similar mistakes that cost them dearly at the polls?
These are the questions that Josh King answers in OFF SCRIPT.

King, who served as Director of Production in Bill Clinton’s White House and later was host of SiriusXM Satellite Radio’s long-running “Polioptics: The Theater of Politics,” brings readers on a wild ride over the last thirty years of the Age of Optics, from Ronald Reagan’s mastery of image to Barack Obama’s “Vanilla Presidency” to, ultimately, the faceoff between Hillary Clinton and Trump.

As one of the White House’s most creative “advance men,” skilled at employing the tools to tell help tell the president’s daily story, and creating the scenes that the media can’t resist turning into news packages and front page photos, King pulls back the curtain on the behind-the-scenes alchemy of political stagecraft. King’s personal account, in-depth interviews, and detail-rich stories, and his unique angle on what drives headlines, makes news, and wins elections will serve as an indispensible companion to those keeping a close eye on the Trump presidency.

JOSH KING is host of the popular SiriusXM radio show PoliOptics and has served as Senior Vice President of Penn Schoen Berland, the global polling and strategic communications firm. Prior to Penn Schoen Berland, he was Vice President, Media and Community Relations, for The Hartford Financial Services Group, Inc., one of the nation's oldest and largest insurance companies. His articles have appeared in Men's Vogue, Variety, the Washington Post and Brill's Content, and he has appeared on the BBC, CNN, Fox News Channel, MSNBC, CNBC, National Public Radio and XM Sirius Satellite Radio. King lives in New York City.

"King presents one of the liveliest and funniest political books of recent years; it will keep political junkies and campaign professionals guffawing and learning." —Library Journal

"By unveiling the mechanics of what makes for great and terrible political iconography, King has written one of the best political books this writer has ever encountered. His skill at interspersing themes from the famous disasters and elaborating on them with his own adventures and insights into the evolution of advance work are worthy of John McPhee." —Fortune

"An eye-opening trip behind the political scene demonstrating how showbiz helped money wreck our political landscape. If you enjoy the TV show Veep, you'll enjoy this book." —Kirkus Reviews

“Josh King’s nuanced insights into the world of political optics and spin is a must read for anyone who is interested in what really goes on behind the polished veil. He’s been both in the campaign trenches and seen the political landscape from 35,000 feet. His perspective is fascinating, entertaining and informative.” —Beau Willimon, Creator, Executive Producer and Showrunner of House of Cards on Netflix

“In the middle of a campaign, right at its core, are the major-league concierges, the people who can pick the right route, find the perfect setting, the best optics and the spot where a candidate can flourish while the press can find its way to a semi-good place to eat and drink. It's a full time, full focus job that comes complete with hilarity, heartache, worry, weariness and the constant realization that what you do or don't do can mean a good or a bad day for the candidate. Ladies and gentlemen, boys and girls, Josh King opens a window on the world of the tireless advance men and women who make any campaign work.” —Mike Barnicle, MSNBC political analyst and columnist for The Daily Beast

"Josh King captures a truth in politics--our candidates need stage management on a grand scale to be elected and re-elected. Many gifted advance people have ushered leaders into power, but more importantly many have driven them back into private life. But King's real insight is that in critical moments it's up to the candidates to perform on the political stage or simply know enough to not put on the funny hat. A great read for anyone who wonders how the political sausage is made." —Joe Lockhart, White House Press Secretary to President Bill Clinton, 1998-2000

"Josh King knows what he is talking about when it comes to political messages, because he was there, painting with ingenuity many of our most enduring images from the great canvasses of American politics and the U.S. Presidency. In Off Script, Josh gives us an unprecedented and a candid, fun look behind the scenes at the creative processes that have shaped the reputations of some of the most important political figures of our times." - Don Baer, White House Chief Speechwriter, 1994-95, and White House Communications Director, 1995-98

"Ever wonder what happens in a presidential campaign when the cameras are off, the doors are closed and no one's looking? Find out in Off Script, a guide to the messy, ugly and sometimes poignant world of political stagecraft by one of the best practitioners in the business." —Jay Carney,White House Press Secretary to President Barack Obama, 2011-2014, and former Washington bureau chief for Time Magazine

"Advance men (and women) are the wildest characters in most political campaigns, in my experience generally a mix of well-organized and half-crazy. In a rollicking ride though the last nearly three decades of presidential campaigns, Josh King chronicles some of the low - and high - moments created by, inflicted upon, or suffered through by the political wizards of stagecraft and appearance, presidential campaign advance teams. Quite a read!" —Karl Rove, Deputy Chief of Staff and Senior Advisor to President George W. Bush and author of Courage and Consequence and The Triumph of William McKinley

"Josh King has written a zippy, snazzy book about the inner workings of American politics and the thankless work performed by idealistic grunts who get no credit when things go well and all the blame when they go badly." —John Podhoretz, author of Hell of a Ride: Backstage at the White House Follies 1989-1993, editor of Commentary and columnist for the New York Post

“Off Script is the inside story of what really happened behind the scenes in the most infamous political campaigns in modern history. Josh King uses his unique perspective as a former campaign “advance” man and political observer to pull back the curtain and reveal the truth behind the spectacle. With the voice of a storyteller and the experience of a seasoned political operative, King deftly brings us along for the ride and shows us how and why these moments defined campaigns, toppled candidates and presidents alike, and forever changed the optics of presidential politics.” —Danny Strong, writer of Empire, The Butler, Game Change, and Recount

“Off Script is a deep dive into the juiciest and most fascinating aspects of modern day government and presidential politics. Perfectly written, there's plenty of page turning drama for everyone from the White House history buff to the Hollywood screenwriter trying to get the smallest of details about White House stage craft exactly right. Josh nails it.” —Nicolle Wallace, White House Communications Director for President George W. Bush, MSNBC political analyst and bestselling author of It's Classified, Eighteen Acres and Madam President

"In Off Script, Josh King takes us on a guided tour of the theater of politics as we rarely see it: from the other side of the proscenium, all the way back stage, and even into the performer's dressing rooms. For those seeking to decode the power of image in the age of optics in our politics, King's book is a must-read." —John Heilemann, coauthor of Game Change and Double Down, cohost of Bloomberg TV's With All Due Respect and Showtime's The Circus

"Do you love the wicked brilliance of campaign stagecraft and the gilded lies that come with being a politician? Not as much as Josh King does. Off Script will show you why it's an art form." —Brad Meltzer, bestselling author of The President's Shadow

“Josh King is one of the most creative political visual artists of our time. He understands how image, picture, and content come together as one to communicate the messages that America sees and hears as it considers its national leaders. What could be more timely as we embark on a national election to pick our next president?” —Mike McCurry, White House Press Secretary, 1995-98

"Discreetly leading the way in every campaign are the advance men and women who literally set the stage. Josh King, a Jedi master of that profession, vividly brings the image makers out of the shadows in OFF SCRIPT." —Mark Halperin, Bloomberg Politics Managing Editor

"Josh King has been at the top of the campaign game for more than 20 years -- and Off Script takes us behind the scenes to show what works, what doesn't and why. A must read for anyone who works on -- or just loves -- the Presidential trail." —George Stephanopoulos

"Presidential politics is theater at the highest level. Successful events are huge productions that require master stage craft. Josh King is the Wizard of Oz of presidential advance. In Off Script, King pulls back the curtain to reveal the stories and secrets behind the making and sometimes breaking of presidents." —Mark McKinnon, Co-creator and Co-executive Producer “The Circus” on Showtime, and former chief media advisor to George W. Bush and John McCain