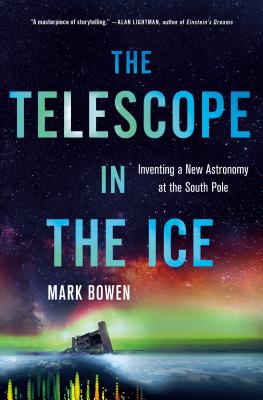 The Telescope in the Ice

Inventing a New Astronomy at the South Pole

"Richly intimate, drawing on Mr. Bowen's long involvement with the IceCube project and its participants...Human emotions are palpable in the author's you-are-there framing." —The Wall Street Journal

Alan Lightman: "A masterpiece of storytelling, bringing to life in rich detail not only the world of science but also the men and women who inhabit that world."

George Musser, author of Spooky Action at a Distance: "If you want to know how science really works, this is your book."

Sheldon Lee Glashow, 1979 Nobel Laureate in Physics: "A page-turning chronicle of the decades-long struggle by hundreds of physicists and engineers to create a frontier laboratory for the pursuit of the new discipline of neutrino astronomy."

The IceCube Observatory has been called the “weirdest” of the seven wonders of modern astronomy by Scientific American. In The Telescope in the Ice, Mark Bowen tells the amazing story of the people who built the instrument and the science involved.

Located near the U. S. Amundsen-Scott Research Station at the geographic South Pole, IceCube is unlike most telescopes in that it is not designed to detect light. It employs a cubic kilometer of diamond-clear ice, more than a mile beneath the surface, to detect an elementary particle known as the neutrino. In 2010, it detected the first extraterrestrial high-energy neutrinos from outer space and thus gave birth to a new field of astronomy.

IceCube is also the largest particle physics detector ever built. Its scientific goals span not only astrophysics and cosmology but also pure particle physics. And since the neutrino is one of the strangest and least understood of the known elementary particles, this is fertile ground. Neutrino physics is perhaps the most active field in particle physics today, and IceCube is at the forefront.

The Telescope in the Ice is, ultimately, a book about people and the thrill of the chase: the struggle to understand the neutrino and the pioneers and inventors of neutrino astronomy. It is a success story.


Praise For The Telescope in the Ice: Inventing a New Astronomy at the South Pole…

"Richly intimate, drawing on Mr. Bowen's long involvement with the IceCube project and its participants...Human emotions are palpable in the author's you-are-there framing. The drilling of ice holes, for example, becomes a nail-biting contest between brute force and finesse, the team (and the reader) ever alert to the mechanical shudder that precedes calamity." —The Wall Street Journal

"Bowen, a physicist-turned-writer, sets his sights high in The Telescope in the Ice, the history of a detector buried in Antarctic ice since the 1990s...Bowen has been embedded in this project since 1998...Bowen does justice to its story." —Nature

"Bowen's insider's history of this remarkable device will reward those drawn to cutting-edge astrophysics." —Booklist

"Mesmerizing... Infusing groundbreaking inquiry with the spirit of those who carry it out, Bowen delivers a tale that’s part educational, part inspirational, and all adventure." —Publisher's Weekly (starred review and PW Book of the Week for 11/13)

"The heroic days of exploration are definitely not over. These scientists haul thick hoses across the ice cap and sleep—when they do sleep—in thin huts with a tin cup for a toilet. Back home they fight off a self-serving Nobel laureate and petty agency head who maneuver to take their project away from them. If you want to know how science really works, this is your book. It ain’t always pretty, but when it works—wow. They have made one of the biggest advances in astronomy since Galileo." —George Musser, contributing editor at Scientific American and Nautilus and author of Spooky Action at a Distance

"What a wonderful, ever-surprising book. This extraordinary story, about a swarm of smart and often strange people trying to catch some of the universe’s smallest particles by turning the South Pole into a giant lens — has found the perfect writer. Whether describing the tiny, speedy, ubiquitous neutrino (billions of which just passed through your eyes), the astro-mechanics of a radiant star, the fathomless difficulties of deep-ice drilling, or the unbelieving wonder of the three researchers in the Stitch-and-Bitch knitting club when they see the first orange rim of daylight after six months of dark, Bowen is the ideal witness, guide, and tale-teller: ludicrously well-informed, always amiable, and with a born bard’s sense of story. This book is priceless." —David Dobbs, Author of Reef Madness: Alexander Agassiz, Charles Darwin, and the Meaning of Coral (Pantheon, 2005) and contributor toThe Atlantic, National Geographic, Nature, and other publications

“This is a major work in many ways, I think, not only a compelling tale, a humane science history, but an inspiring picture of how great science gets done (or not). Bowen reports from the inside on the decades long struggle to record cosmic neutrinos, and not only do we see it finally realized, but with neutrinos once again not behaving as expected, pointing to new mysteries of the cosmos. Having been a losing player in this long science game, my hat is off to the tough team who have pulled off one of the great physics experiments of all time.” —John G. Learned, Professor of Physics, University of Hawaii, Manoa

"The Telescope in the Ice is a masterpiece of storytelling, bringing to life in rich detail not only the world of science but also the men and women who inhabit that world." —Alan Lightman, author of Einstein's Dreams

"A page-turning chronicle of the decades-long struggle by hundreds of physicists and engineers to create a frontier laboratory for the pursuit of the new discipline of neutrino astronomy. The IceCube Neutrino Observatory at the South Pole has already seen dozens of energetic neutrinos that are likely to have originated somewhere beyond the solar system." —Sheldon Lee Glashow, University Professor, Boston University, and 1979 Nobel Laureate in Physics

"Bowen’s account of the immense challenges of an unprecedented feat of engineering under extreme conditions is both compelling and inspiring…A fascinating and intimate journey through the history of the science and scientists behind one of the most revolutionary telescopes." —James McClintock, Professor of Polar and Marine Biology, University of Alabama at Birmingham

MARK BOWEN is a writer and physicist. He earned a bachelor’s degree and a doctorate in physics at MIT and worked for a decade in the medical industry. Bowen has written for Climbing, Natural History, Science, Technology Review, and AMC Outdoors. He has been embedded in AMANDA and IceCube since 1998. He lives in Vermont. The Telescope in the Ice is his third book.
Loading...
or
Not Currently Available for Direct Purchase