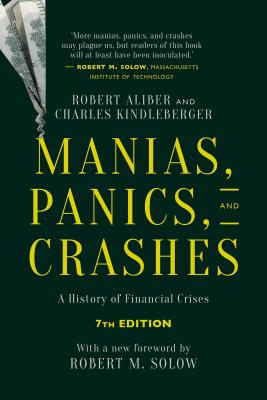 This seventh edition of an investment classic has been thoroughly revised and expanded following the latest crises to hit international markets. Renowned economist Robert Z. Aliber introduces the concept that global financial crises in recent years are not independent events, but symptomatic of an inherent instability in the international system.

Robert Z. Aliber is Professor Emeritus of International Economics and Finance at the University of Chicago Booth School of Business, USA. He was director of the Center for Studies in International Finance; on the research staff for the Committee for Economic Development and Commission on Money and Credit; and senior economic advisor for the Agency for Economic Development, U.S. Department of State. Best-selling publications include The Reconstruction of International Monetary Arrangements (ed., Macmillan, 1986), The Handbook of International Financial Management (ed. Dow Jones Irwin, 1989), and Global Portfolios (co-editor, Business One Irwin, 1991). He is a co-author of Money, Banking, and the Economy (Norton, First Edition, 1981, Fourth Edition 1990), Manias, Panics, and Crashes: A History of Financial Crises (Palgrave MacMillan, 5th ed. 2005, 6th ed. 2011), and author of The International Money Game (Palgrave MacMillan, 2001). Aliber has consulted to the Board of Governors of the Federal Reserve System and to other U.S. government agencies, the World Bank and the International Monetary Fund, testified before committees of the Congress, and lectured extensively in the United States and abroad. The late Charles P. Kindleberger was the Ford Professor of Economics at MIT for 33 years and author of over 30 books. He was best known as a financial historian, whom the Economist referred to as 'the master of the genre' on financial crisis. He advanced the study of international finance and helped to devise the Marshall Plan, approved by Congress, for Europe's reconstruction after World War II. During his tenure at MIT, Kindleberger was a consultant to the federal government several times, most often for the Treasury and the Federal Reserve. In 1985, he was president of the American Economic Association. Select key publications by Kindleberger include: International Short-Term Capital Movements (Columbia University Press, 1937), The Dollar Shortage (New York: Wiley and MIT Press, 1950), International Economics (Richard D. Irwin, 1953, 1958, 1963, 1968, 1973, (and with Peter H. Lindert) 1978, 1982), Economic Development (McGraw-Hill, 1958, 1965, (and with Bruce Herrick) 1977, 1983), The World In Depression, 1929-1939 (University of California Press, 1973, revised and enlarged, 1986), and Manias, Panics, and Crashes: A History of Financial Crises (Palgrave Macmillan, 1978, revised and enlarged, 1989, 3rd ed. 1996, 4th ed. 1996), The Life of an Economist: An Autobiography (Basil Blackwell, 1991).
Loading...
or support indie stores by buying on