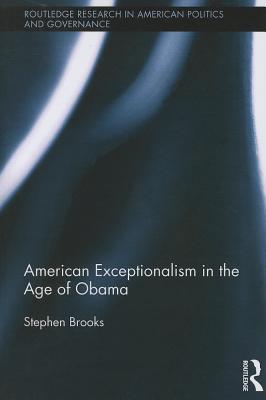 The election of President Obama in 2008 and the apparent decline of American power in the world has rekindled an old and important debate. Is the United States exceptional in its values and institutions, as well as in the role that it is destined to play in world affairs?

In this book, Stephen Brooks argues that American exceptionalism has been and continues to be real. In making this argument he focuses on five aspects of American politics and society that are most crucial to an understanding of American exceptionalism today. They include the appropriate relationship between the state and citizens, religion, socio-economic mobility, America's role in the world, and ideas about the Constitution.

American exceptionalism matters in domestic politics chiefly as a political narrative around which support for and opposition to certain policies, values and vision of American society coalesce. But in world affairs it is not the story but the empirical reality of American exceptionalism that matters. Although the long era of America's global economic dominance has entered what might be called a period of diminished expectations, the United States remains exceptional--the indispensable nation--in world affairs and is likely to remain so for many years to come.

Stephen Brooks teaches at the University of Michigan and is Professor at the University of Windsor. He teaches in the areas of Canadian politics and public administration, and American politics. His research interests include the political influence of intellectuals, political thought in Canada and the United States, federalism, and public policy.
Loading...
or
Not Currently Available for Direct Purchase