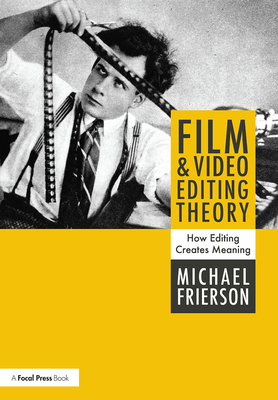 Film and Video Editing Theory offers an accessible, introductory guide to the practices used to create meaning through editing. In this book, Michael Frierson synthesizes the theories of the most prominent film editors and scholars, from Herbert Zettl, Sergei Eisenstein, and No l Burch to the work of landmark Hollywood editors like Walter Murch and Edward Dmytryk. In so doing, he maps out a set of craft principles for readers, whether one is debating if a flashback reveals too much, if a certain cut clarifies or obscures the space of a scene, or if a shot needs to be trimmed. The book is grounded in the unity of theory and practice, looking beyond technical proficiency in a specific software to explain to readers how and why certain cuts work or don't work.

Michael Frierson is a Professor in Media Studies at the University of North Carolina at Greensboro. He is the author of Clay Animation: American Highlights 1908 to the Present (1994), which won the McLaren-Lambart Award from the National Film Board of Canada for the Best Scholarly Book on Animation for 1995. He teaches film theory, film/video production and editing, and has produced, shot and edited feature documentaries, as well as short films for Nickelodeon, Children's Television Workshop, MSN Video, and AT&T Blue Room.
or support indie stores by buying on
Copyright © 2020 American Booksellers Association