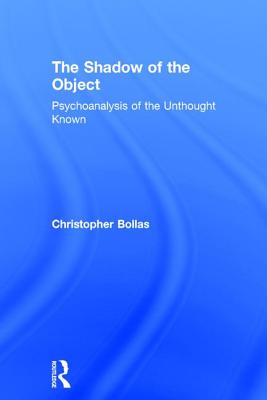 The Shadow of the Object

Psychoanalysis of the Unthought Known

In The Shadow of the Object, Christopher Bollas integrates aspects of Freud's theory of unconscious thinking with elements from the British Object Relations School. In doing so, he offers radical new visions of the scope of psychoanalysis and expands our understanding of the creativity of the unconscious mind and the aesthetics of human character.

During our formative years, we are continually impressed by the object world. Most of this experience will never be consciously thought, and but it resides within us as assumed knowledge. Bollas has termed this the unthought known, a phrase that has ramified through many realms of human exploration, including the worlds of letters, psychology and the arts.

Aspects of the unthought known --the primary repressed unconscious --will emerge during a psychoanalysis, as a mood, the aesthetic of a dream, or in our relation to the self as other. Within the unique analytic relationship, it becomes possible, at least in part, to think the unthought -- an experience that has enormous transformative potential.

Published here with a new preface by Christopher Bollas, The Shadow of the Object remains a classic of the psychoanalytic literature, written by a truly original thinker.

Christopher Bollas is a Member of the British Psychoanalytical Society and the Los Angeles Institute and Society for Psychoanalytical Research.
Loading...
or
Not Currently Available for Direct Purchase