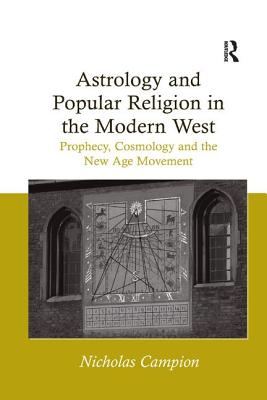 Astrology and Popular Religion in the Modern West

This book explores an area of contemporary religion, spirituality and popular culture which has not so far been investigated in depth, the phenomenon of astrology in the modern west. Locating modern astrology historically and sociologically in its religious, New Age and millenarian contexts, Nicholas Campion considers astrology's relation to modernity and draws on extensive fieldwork and interviews with leading modern astrologers to present an invaluable contribution to our understanding of the origins and nature of New Age ideology. This book challenges the notion that astrology is either 'marginal' or a feature of postmodernism. Concluding that astrology is more popular than the usual figures suggest, Campion argues that modern astrology is largely shaped by New Age thought, influenced by the European Millenarian tradition, that it can be seen as an heir to classical Gnosticism and is part of the vernacular religion of the modern west.

Nicholas Campion is Associate Professor in Cosmology and Culture and Principal Lecturer in Faculty of Humanities and the Performing Arts at the University of Wales Trinity Saint David. He is programme director of the MA in Cultural Astronomy and Astrology.
Loading...
or support indie stores by buying on