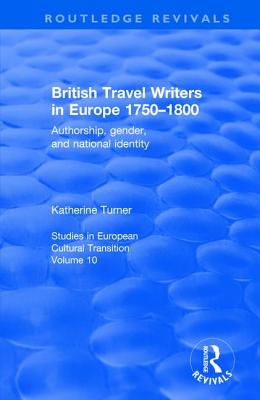 This title was first published in 2001: Hundreds of European travelogues produced by British travellers between 1750 and 1800 remain out of sight in most libraries and have generally been out of print since the 18th century. While many people with a working knowledge of the 18th century are familiar with works including Sterne's A Sentimental Journey and Smollett's Travels through France and Italy, those produced by less literary travellers are largely unknown. This study aims to recreate the world of 18th-century travel writing in order to illuminate its central role in shaping Britain's emerging sense of national identity - an identity which proves to be more complex an less homogeneous than some cultural and historical studies would suggest. The author finds that the developing discourse of national character is bound up with questions of gender: national and authorial virtue are projected in terms of appropriately gendered behaviour, for male and female travel writers alike. In turn, gender intersects with class, most obviously in the tendency to denigrate aristocratic travellers as effeminate and celebrate the more manly activities of the middle-class traveller. These then - national identity, authorship and gender - are the central preoccupations of the study