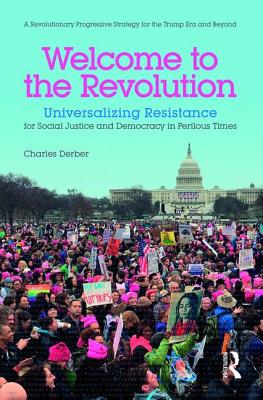 Welcome to the Revolution

Universalizing Resistance for Social Justice and Democracy in Perilous Times

When the Women's March gathered millions just one day after Trump's inauguration, a new era of progressive action was born. Organizing on the far Right led to Trump's election, bringing authoritarianism and the specter of neo-fascism, and intensifying corporate capitalism's growing crises of inequality and injustices. Yet now we see a new universalizing resistance among progressive and left movements for truth, dignity, and a world based on democracy, equality, and sustainability.

Derber ​offers the first comprehensive guide to this new era and an original vision and strategy for movement success. He convincingly shows how only a new ​universalizing​ wave, a ​progressive​ and revolutionary movement of movements, can counter the world-universalizing economic and cultural forces of intensifying corporate and far-right power.

Vivid and highly accessible, this​ book is for activists, students, and all ​citizens concerned about the erosion of justice and democracy. It thoroughly illuminates the rationale, theory, practice, ​humanism, love, ​and joy of ​the​ ​social transformation that we urgently need.

A life-long activist and public speaker, Charles Derber is the author of 20 books and is Professor of Sociology at Boston College. He writes for and has been reviewed in the New York Times, the Washington Post, the Boston Globe, Time, Newsweek, Newsday, Truthout, and The Christian Science Monitor. He has made hundreds of radio and television appearances. His books are translated into Chinese, Korean, Tamil, German and Polish- and he is a bestselling author in South Korea; he has done extended book tours in German bookstores and blues coffee houses, and has lectured often in Italy. Derber is a public intellectual - shortlisted in 2006 for best book in current affairs - who believes that serious ideas should be written in an accessible and entertaining style. His most recent books include Bully Nation; Sociopathic Society: A People's Sociology of the United States; and The Disinherited Majority: Capital Questions - Piketty and Beyond.
Loading...
or support indie stores by buying on