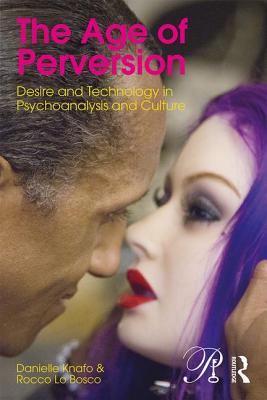 The Age of Perversion

We have entered the age of perversion, an era in which we are becoming more like machines and they more like us.The Age of Perversion explores the sea changes occurring in sexual and social life, made possible by the ongoing technological revolution, and demonstrates how psychoanalysts can understand and work with manifestations of perversion in clinical settings.

Until now theories of perversion have limited their scope of inquiry to sexual behavior and personal trauma. The authors of this book widen that inquiry to include the social and political sphere, tracing perversion's existential roots to the human experience of being a conscious animal troubled by the knowledge of death. Offering both creative and destructive possibilities, perversion challenges boundaries and norms in every area of life and involves transgression, illusion casting, objectification, dehumanization, and the radical quest for transcendence.

This volume presents several clinical cases, including a man who lived with and loved a sex doll, a woman who wanted to be a Barbie doll, and an Internet sex addict. Also examined are cases of widespread social perversion in corporations, the mental health care industry, and even the government. In considering the continued impact of technology, the authors discuss how it is changing the practice of psychotherapy. They speculate about what the future may hold for a species who will redefine what it means to be human more in the next few decades than during any other time in human history.

The Age of Perversion provides a novel examination of the convergence of perversion and technology that will appeal to psychoanalysts and psychoanalytic psychotherapists, social workers, mental health counselors, sex therapists, sexologists, roboticists, and futurists, as well as social theorists and students and scholars of cultural studies.

Danielle Knafo is a professor in the clinical psychology doctoral program at Long Island University and a faculty member and supervisor in New York University's postdoctoral program in psychotherapy and psychoanalysis. She has lectured internationally and published extensively, including Dancing with the Unconscious (2012) with Routledge. She maintains a private practice in New York.  Rocco Lo Bosco is a teacher and writer who has published nonfiction, poetry, short stories, and two novels - Buddha Wept (2003) and Ninety Nine (2015). He edits articles on psychoanalysis, science, and the philosophy of science.
Loading...
or
Not Currently Available for Direct Purchase