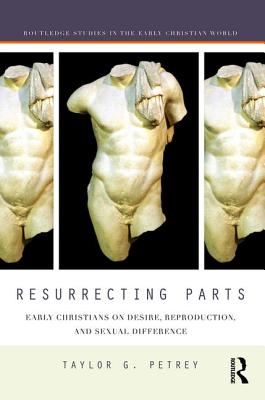 During the late second and early third centuries C.E. the resurrection became a central question for intellectual commentary, with increasingly tense divisions between those who interpreted the resurrection as a bodily experience and those who did not. The relationship between the resurrected person and their mortal flesh was also a key point of discussion, especially in regards to sexual desires, body parts, and practices. Early Christians struggled to articulate how and why these bodily features related to the imagined resurrected self. The problems posed by the resurrection thus provoked theological analysis of the mortal body, sexual desire and gender.

Resurrecting Parts is the first study to examine the place of gender and sexuality in early Christian debates on the nature of resurrection, investigating how the resurrected body has been interpreted by writers of this period in order to address the nature of sexuality and sexual difference. In particular, Petrey considers the instability of early Christian attempts to separate maleness and femaleness. Bodily parts commonly signified sexual difference, yet it was widely thought that future resurrected bodies would not experience desire or reproduction. In the absence of sexuality, this insistence on difference became difficult to maintain. To achieve a common, shared identity and status for the resurrected body that nevertheless preserved sexual difference, treatises on the resurrection found it necessary to explain how and in what way these parts would be transformed in the resurrection, shedding all associations with sexual desires, acts, and reproduction.

Exploring a range of early Christian sources, from the Greek and Latin fathers to the authors of the Nag Hammadi writings, Resurrecting Parts is a fascinating resource for scholars interested in gender and sexuality in classical antiquity, early Christianity, asceticism, and, of course, the resurrection and the body.

Taylor G. Petrey is the Lucinda Hinsdale Stone Assistant Professor of Religion and the Director of the Women, Gender, and Sexuality Program at Kalamazoo College, USA.
or support indie stores by buying on
Copyright © 2020 American Booksellers Association