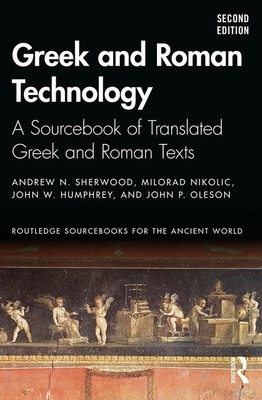 In this new edition of Greek and Roman Technology, the authors translate and annotate key passages from ancient texts to provide a history and analysis of the origins and development of technology in the classical world.

Sherwood and Nikolic, with Humphrey and Oleson, provide a comprehensive and accessible collection of rich and varied sources to illustrate and elucidate the beginnings of technology. Among the topics covered are energy, basic mechanical devices, hydraulic engineering, household industry, medicine and health, transport and trade, and military technology. This fully revised sourcebook collects more than 1300 passages from over 200 ancient sources and a diverse range of literary genres, such as the encyclopaedic Natural History of Pliny the Elder, the poetry of Homer and Hesiod, the philosophies of Plato, Aristotle, and Lucretius, the agricultural treatises of Varro, Columella, and Cato, the military texts of Philo of Byzantium and Aeneas Tacticus, as well as the medical texts of Galen, Celsus, and the Hippocratic Corpus. Almost 100 line drawings, indexes of authors and subjects, introductions outlining the general significance of the evidence, notes to explain the specific details and current bibliographies are included.

This new and revised edition of Greek and Roman Technology will remain an important and vital resource for students of technology in the ancient world, as well as those studying the impact of technological change on classical society.