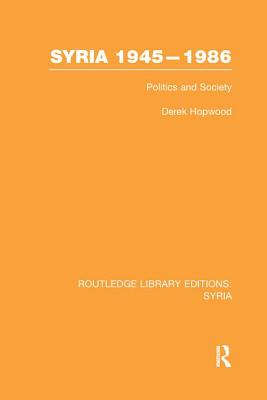 Syria has often lacked sympathetic observers. This book tries to interpret the country and its people in terms of how they see their own history and of what they are trying to achieve. More than a political or diplomatic history, it discusses the economy, society, education and culture to help the reader understand and explain modern Syria.

A description of the country deals with the physical and other factors which have influenced Syria's development. An historical survey concentrates mainly on the period after the Second World War and explains why a knowledge of Syrian history is important and why Syrians look at their history in the way they do. The achievements, problems and failures of President Asad are fully discussed. Further chapters explain the ideological factors which have been of vital importance in Syrian politics, the development of education, the economy and society. The author looks at examples of contemporary Syrian literature and the way in which writers view the problems of their society and culture.

This is a clear, succinct and readable account of modern Syria which will be essential for all those studying the Middle East, the developing world or international relations.