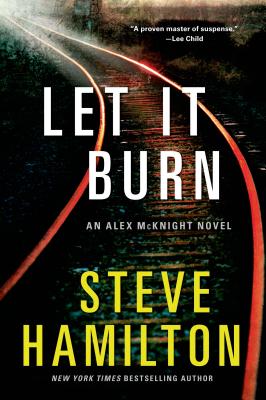 Alex McKnight swore to serve and protect Detroit as a police officer, but a trip to Motown these days is a trip to a past he'd just as soon forget. The city will forever remind him of his partner's death and of the bullet still lodged in his own chest.

Then he gets a call from his old sergeant. A young man Alex helped put away—in the one big case that marked the high point of his career—will be getting out of prison. When the sergeant invites Alex downstate to have a drink for old times' sake, it's an offer he would normally refuse. However, there's a certain female FBI agent he can't stop thinking about, so he gets in his truck and he goes back to Detroit.

While there, he's reminded of something about that young man's case, a seemingly small piece of the puzzle that he never got to share. It's not something anyone wants to hear, but Alex can't let go of the feeling that they arrested the wrong man. And that the real killer not only got away, but went on to kill again.

“This may be his best one so far.” —Milwaukee Journal Sentinel

“As the tense story unfolds, the action builds to a violent climax. This beautifully crafted novel lives up to the standard fans have come to expect from one of the few writers to have ever been honored with two Edgar Awards.” —Associated Press

Steve Hamilton was born and raised in Detroit, and graduated from the University of Michigan where he won the prestigious Hopwood Award for fiction. In 2006, he won the Michigan Author Award for his outstanding body of work. His novels have won numerous awards and media acclaim beginning with the very first in the Alex McKnight series, A Cold Day in Paradise, which won the Private Eye Writers of America/St. Martin's Press Award for Best First Mystery by an Unpublished Writer. Once published, it went on to win the MWA Edgar and the PWA Shamus Awards for Best First Novel, and was short-listed for the Anthony and Barry Awards. His book The Lock Artist is the winner of the 2011 Edgar Award for Best Novel. Hamilton currently works for IBM in upstate New York where he lives with his wife Julia and their two children.
Loading...
or support indie stores by buying on
(This book is on backorder)