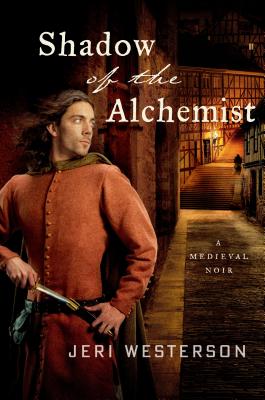 Shadow of the Alchemist

"Creative and enthralling . . . If you enjoy authentic Medieval history combined with modern suspense, this one's for you." John Lescroart

Once a Knight of the Realm, Crispin Guest was stripped of his title and his lands and must now earn his meager living through his wits. With the help of his young apprentice, reformed thief Jack Tucker, Guest is known to certain populations as The Tracker, the man who can find anything for a price. It is for that reason that Guest is sought out by Nicholas Flamel, an absent-minded alchemist. Both Flamel's wife and his apprentice are missing, and he wants Guest to find them and bring them home.

Before he can even begin looking, Guest discovers that Flamel's house has been ransacked. Then Flamel's assistant turns up dead, hanging from the rafters with a note pinned to his chest by a dagger. It is a ransom note that promises the safe return of his wife in exchange for the Philosopher's Stone, which is reputed to turn lead into gold and create the elixir of life. And the kidnappers aren't the only ones after it. From the highest nobility to Flamel's fellow alchemists, everyone is seeking the stone for themselves. Guest must rescue the missing wife and find the stone before it falls into unworthy hands, in Jeri Westerson's Shadow of the Alchemist.


Praise For Shadow of the Alchemist…

"Crispin Guest is our medieval James Bond. Bold, determined and oh-so-sexy, he has a knack for being in the wrong place at the right time. In this latest outing, he plays a dangerous game of cat-and-mouse through the lethal streets of London, hunting down a terrifying secret to save a woman from unholy death. Lively action and heart-stopping suspense, twisting plot turns and a compelling cast of characters easily make this one of Jeri Westerson's best books yet!" –C.W. Gortner, author of The Tudor Conspiracy

“Westerson has created an attractive, intelligent protagonist in Crispin Guest and a delightful sidekick in Crispin’s apprentice Jack Tucker . . . She draws you into the world of her characters. I highly recommend this book…and I look forward to meeting Crispin and Jack again.” —Historical Novel Society Review on Troubled Bones

“This is a fantastic book you won't want to put down!” —Romantic Times on Troubled Bones

JERI WESTERSON is the author of five previous books featuring Crispin Guest--Veil of Lies, Serpent in the Thorns, The Demon's Parchment, Troubled Bones, and Blood Lance. She lives in Menifee, California.
Loading...
or
Not Currently Available for Direct Purchase