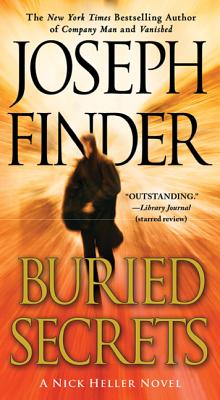 Joseph Finder introduced Nick Heller, a "private spy" who finds out things powerful people want to keep hidden, to widespread acclaim from the critics and wild enthusiasm from the readers, in the New York Times bestselling novel Vanished. Now, in Buried Secrets, Nick Heller returns, finding himself in the middle of a life-or-death situation that's both high-profile and intensely personal.

Nick has returned to his old home town of Boston to set up his own shop. There he's urgently summoned by an old family friend. Hedge fund titan Marshall Marcus desperately needs Nick's help. His teenaged daughter, Alexa, has just been kidnapped. Her abduction was clearly a sophisticated professional job, done with extraordinary precision. Alexa, whom Nick has known since she was young, is now buried alive, held prisoner in an underground crypt, a camera trained on her, her suffering streaming live over the internet. She's been left with a limited supply of food and water and, if her father doesn't meet the demands of her shadowy kidnappers, she'll die. And as Nick begins to probe, he discovers that all is not quite right with Marshall Marcus's business. He's being investigated by the FBI, he has a lot of shady investors, his fund is in danger and now he has a lot of powerful enemies who may have the motivation to go after Marcus's daughter. But to find out who's holding Alexa Marcus hostage, Nick has to find out why. Once he does, he uncovers an astonishing conspiracy that reaches far beyond anything he could have imagined. And if he's going to find Alexa in time, he will have to flush out and confront some of his deadliest opponents ever.

“The best thriller of the year.” —Chicago Sun-Times on Vanished

“Lightning-paced from the first page to the last.” —Providence Journal on Vanished

“If Jack Reacher met Nick Heller in a dark alley, my money's on Reacher. But it would be ugly. Or would it? Actually, I think they'd go for a beer together and set the world to rights--because Joseph Finder has given me a terrific new hero to root for. This is an action-packed, full-throttle, buy-it-today-read-it-tonight series that you definitely shouldn't miss.” —Lee Child on Vanished

“A humdinger....a thriller to enjoy for its Washington locales, convincing familiarity with cutting-edge spy gadgetry, and taut action scenes.” —Washington Post on Vanished

“Cliffhangers galore, the fascinating tradecraft of corporate espionage, and an engrossing story will propel readers through this outstanding thriller. Highly recommended as a great summer read.” —Library Journal (starred review) on Vanished

“Written in staccato chapters that are emotionally supercharged and action-packed, this thriller will more than satisfy adrenaline junkies and have them guessing until the very end.” —Publishers Weekly on Vanished

“If you only read one book this summer, make it Vanished.” —Crimespree magazine on Vanished

“Moves at the pace of an injected neurotoxin...You'll curse Finder for keeping you up into the early hours.” —Shots magazine on Vanished

“Even though I'd been warned that everyone who'd read it did so in one sitting, I cracked the cover at 10 p.m., figuring yeah, yeah, one sitting, right. When I passed out at 4 a.m., I was thinking, boy, if I could just keep my eyes open long enough to finish this!” —Myles Knapp, Contra Costa Times on Vanished

“A white-knuckle tale of suspense.” —Chicago Sun-Times on Power Play

“The action is swift...keeps the plot bubbling and the pages turning.” —Wall Street Journal on Power Play

“Thrilling. . . Start Power Play this afternoon and you'll have the nightstand lamp burning at bedtime.” —Pittsburgh Post-Gazette on Power Play

“A roller coaster of a read.” —Cosmopolitan on Killer Instinct

“It starts off with a bang and doesn't slow down until the last page.” —Ottawa Sun on Killer Instinct

“It's everything a thriller should be: suspenseful, entertaining--and, above all, thrilling.” —Chicago Sun-Times on Company Man

“Once again, Finder has produced a page-turning corporate thriller with enough twists and turns for any reader.” —Denver Post on Company Man

“The thriller is rejuvenated by Joseph Finder with Company Man. That's because Finder puts the emphasis on sharply created characters instead of potentially eye-glazing business minutiae.” —Chicago Tribune on Company Man

“The most entertaining thriller of the year.” —Publishers Weekly on Paranoia

“Jet-propelled...this twisting, stealthily plotted story...weaves a tangled and ingeniously enveloping web...[with a] killer twist for the end.” —The New York Times on Paranoia

“Riveting...perhaps the finest of the contemporary thriller novelists, you may think you've read one mystery too many. Find Finder and you'll think again.” —Pittsburgh Post-Gazette on Paranoia

“Page-turning perfection... Finder has that rare knack for instantly pulling the reader into the story and then tops that with surprises within surprises.” —Cleveland Plain Dealer on Paranoia

“Imaginative and original, this is a gripping thriller with three characteristics too rare in the genre: humor, heart, and good writing.” —Detroit Free Press on Paranoia