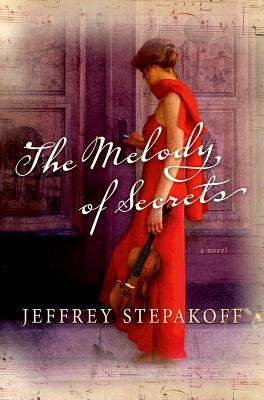 The Melody of Secrets

Jeffrey Stepakoff's" The Melody of Secrets" is an epic love story set against the 1960s U.S. space program, when deeply-buried secrets could threaten not just a marriage, but a country.

Maria was barely eighteen as WWII was coming to its explosive end. A brilliant violinist, she tried to comfort herself with the Sibelius Concerto as American bombs rained down. James Cooper wasn't much older. A roguish fighter pilot stationed in London, he was shot down during a daring night raid and sought shelter in Maria's cottage.

Fifteen years later, in Huntsville, Alabama, Maria is married to a German rocket scientist who works for the burgeoning U.S. space program. Her life in the South is at peace, purposefully distanced from her past. Everything is as it should be until James Cooper walks back into it.

Pulled from the desert airfield where he was testing planes no sane Air Force pilot would touch, and drinking a bit too much, Cooper is offered the chance to work for the government, and move himself to the front of the line for the astronaut program. He soon realizes that his job is to report not only on the rocket engines but also on the scientists developing them. Then Cooper learns secrets that could shatter Maria's world...


Praise For The Melody of Secrets…

Praise for The Orchard:"An unforgettable story that will follow the reader’s heart for a long time." —Patti Callahan Henry

"A reminder of why I love to read." —Sandra Brown

"Stepakoff follows Fireworks over Toccoa with another warmhearted love story....The heavy focus on the leads' competing drives and ambitions lifts this above your standard romance, though readers with an itch for a solid love story won't be disappointed."—Publishers Weekly

"This is a truly heartwarming and emotional story, with characters so interesting and unusual the reader can’t help but keep reading until the final page has been turned."—RT Book Reviews

Praise for Fireworks Over Toccoa:
“A luminous love story that readers won’t soon forget . . . at once heartbreaking and triumphant—an affirmation of love.” —Emily Giffin

“Fireworks Over Toccoa pinches the heart, telling a poignant tale of love and loss, of making choices and letting go.   With carefully-crafted characters, a lush and very real setting, this is a not-to-be missed book. Move over Nicholas Sparks!”—Karen White, New York Times bestselling author

“Fireworks Over Toccoa literally explodes with life.  Its insights about place and love versus duty are as sharp as an eagle’s eye.  I absolutely loved every character and hated for their story to end.  Kaboom!  A brilliant first effort from Jeffrey Stepakoff!  Congratulations!”—Dorothea Benton Frank, NY Times bestselling author of Return to Sullivans Island

“Read it in the tub.”—Redbook

"Fireworks Over Toccoa is the poignant recollection of a young woman's coming of age and finding love, set against the vivid tableau of small town America during the Second World War, Stepakoff skillfully crafts a remarkable tale of fate and chance, choice and consequences, rewarding readers with a mesmerizing experience."—Pam Jenoff, International bestselling author of The Kommandant's Girl and Almost Home

“Fireworks Over Toccoa is a terrific story--moving, whimsical and original, a real page-turner destined for the big screen.”—Joanne Harris, International Bestselling author of Chocolat

“An unexpected love affair of Lily Davis, a WW II bride, is brilliantly portrayed by Jeffrey Stepakoff. Filled with suspense and surprise, I couldn't put it down. As dazzling as the fireworks which brought this war-time couple together, their passionate love affair is spellbinding. I was mesmerized to the last page!”—Marjorie Hart, National Bestselling author of Summer at Tiffany

JEFFREY STEPAKOFF has written for the Emmy-winning The Wonder Years, Sisters, and Dawson's Creek, for which he was co-executive producer. Author of the acclaimed novels, Fireworks Over Toccoa and The Orchard, he has also developed and written plays, TV pilots and major motion pictures. Stepakoff holds a BA in journalism from UNC-Chapel Hill and an MFA in playwriting from Carnegie Mellon. He lives in Georgia with his wife and three young children. His fiction is published in six languages.
Loading...
or
Not Currently Available for Direct Purchase