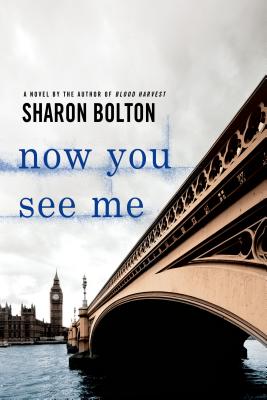 Now You See Me

Late one night after interviewing a witness, Lacey Flint, a young detective constable, stumbles onto a woman brutally stabbed just moments before. Within twenty-four hours, a reporter receives an anonymous letter pointing out alarming similarities between the murder and Jack the Ripper's first murder—a letter that calls out Lacey by name. If it's real, and they have a killer bent on re-creating London's bloody past, history shows they have just five days until the next attempt.

No one believes the connections are anything more than a sadistic killer's game, not even Lacey, whom the killer seems to be taunting specifically. But as the case unfolds, the details start reminding Lacey of a part of her own past she'd rather keep hidden. And the only way to do that is to catch the killer herself.

Fast paced and riveting, Sharon Bolton's modern gothic novel Now You See Me is nothing less than a masterpiece of suspense fiction.

“Now You See Me is really special: multilayered and sophisticated, but tough too--like getting hit in the face with a Swiss watch.” —Lee Child

“Excellent . . . Now You See Me is a cerebral thriller that avoids clichés. Each twist and turn is unpredictable.” —Oline H. Cogdill, Sun-Sentinel

“Bolton provides excruciating tension.” —Kirkus Reviews (one of the “best” mysteries of 2011)

SHARON BOLTON is a Mary Higgins Clark Award winner and an ITW Thriller Award, CWA Gold Dagger and Barry Award nominee. Her books included the Lacey Flint novels: Now You See Me, Dead Scared, Lost, and A Dark and Twisted Tide. She lives near London, England.

S. J. BOLTON (AKA Sharon Bolton), a Mary Higgins Clark Award winner and an ITW and Barry Award nominee, has also been shortlisted for CWA Gold Dagger Award. She grew up in Lancashire, England, and now lives near Oxford with her family. Her books included the Lacey Flint novels: Now You See Me, Dead Scared, Lost, and A Dark and Twisted Tide.
Loading...
or support indie stores by buying on