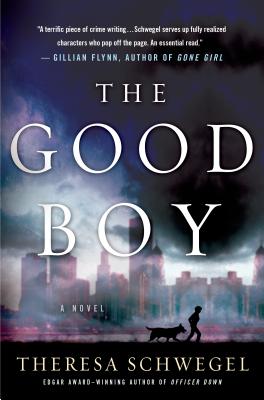 Edgar award winner Theresa Schwegel returns with "The Good Boy," her most dramatic and emotional novel to date, a family epic that combines the hard-boiled grit of her acclaimed police thrillers with an intimate portrait of a young boy trying to follow his heart in an often heartless city.

For Officer Pete Murphy, K9 duty is as much a punishment as a promotion. When a shaky arrest reignites a recent scandal and triggers a multimillion-dollar lawsuit, all eyes are on Pete as the department braces for another media firestorm.

Meanwhile, Pete's eleven-year-old son Joel feels invisible. His parents hardly notice him unless they're arguing about his "behavioral problems" and his older sister, McKenna, has lately disappeared into the strange and frightening world of teenagerdom. About the only friend Joel has left is Butchie, his father's furry "partner."

When Joel and Butchie follow McKenna to a neighborhood bully's party, illegal activity kicks the dog's police training into overdrive, and soon the duo are on the run, navigating the streets of Chicago as they try to stay one step ahead of the bad guys bad guys who may have a very personal interest in getting some payback on Officer Pete Murphy.


Praise For The Good Boy…

"A terrific piece of crime writing—propulsive action paired with the authentic sounds of a city on the make. Theresa Schwegel’s ear for dialogue is pitch-perfect—from the station house to the streets, from cops to robbers to teens, Schwegel serves up fully-realized characters who pop off the page. An essential read." —GILLIAN FLYNN

“A vivid, nuanced, and emotional tale told in prose that crackles with electricity. The characters are real, their world is our own, and their stories the kind that linger long after the last page is turned. At once a thriller and a beautifully rendered family story, it simply won't disappoint.”—MICHAEL KORYTA

"A brooding, world-wise, humane piece of crime fiction…Readers who respond to it will find the book lingering in their minds longer than most."—USA Today


"Theresa Schwegel is an Edgar-winning crime writer whose Chicago police stories are more nuanced and impassioned than most books of their genre….For all the dog books currently in vogue, it’s hard to beat this one for canine verisimilitude or talent….The dog elevates a fairly conventional detective story into something much more lovable."—The New York Times


“[A] nail-biter…The reader will empathize with everyone from Pete, who has his heart in the right place but makes several wrong turns, to Butch, who never speaks yet says volumes.”—Publisher’s Weekly

THERESA SCHWEGEL was born and raised in Chicago, Illinois. A Loyola University graduate, she received an MFA in screenwriting at Chapman University. The author of four novels, her debut, Officer Down, won the Edgar Award for Best First Novel and was shortlisted for the Anthony Award.
Loading...
or
Not Currently Available for Direct Purchase