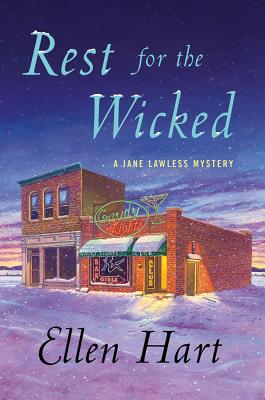 Rest for the Wicked

DeAndre Moore came to Minneapolis from St. Louis with a purpose, but things aren't going as he planned. When it becomes clear he's in way over his head, DeAndre can think of only one person to call for help—his Uncle Nolan's business partner, newly licensed private investigator Jane Lawless. However, by the time Jane listens to his voice mail, she's hearing a voice from beyond the grave—DeAndre left the message only minutes before he was knifed to death outside a gentlemen's club. Soon his murder isn't the only one.

With Nolan in the hospital, Jane sets out to find out who killed DeAndre, how his death is connected with the others, and what he was doing in Minneapolis in the first place.

Rest for the Wicked is another outstanding addition to Ellen Hart's award-winning mystery series.

“Engaging” —Publishers Weekly on The Lost Women of Lost Lake

“This engrossing, thought-provoking entry by a Lambda and Minnesota Book Award winner proves that long-running series don't have to lose steam.” —Library Journal on The Lost Women of Lost Lake

“One of the strengths of Hart's acclaimed series (this is the 18th book) is that the rich details about food, family and place never undermine the swift pacing of her plots. Readers feel so much a part of Jane's world that we'd fight for a table at the Lyme House Restaurant in Minneapolis just for a taste of Jane's corned beef and cabbage.” —Star Tribune (Minneapolis, MN) on The Cruel Ever After