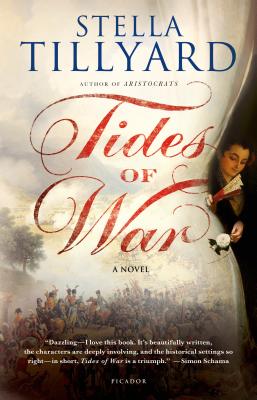 An epic novel about love and war, set in Regency England and Spain during the Peninsular War

Tides of War opens in England with the recently married, charmingly unconventional Harriet preparing to say good-bye to her husband, James, as he leaves to join the Duke of Wellington's troops in Spain. Harriet's and James's interwoven stories of love and betrayal propel this sweeping and dramatic novel as it moves between Regency London on the cusp of modernity---a city in love with science, the machine, and money---and the shocking violence of the war in Spain. With dazzling skill, Stella Tillyard explores not only the effects of war on the men at the front but also the freedoms it offers the women left behind. A powerful rendering of the Napoleonic era and a brilliant examination of battles yet to come, Tides of War is "one of the most assured literary debuts in years…the perfect answer to anyone who believes that the past is out of date" (Amanda Foreman, Financial Times).


Praise For Tides of War: A Novel…

“Dazzling---I love this book. It's beautifully written, the characters are deeply involving, and the historical setting so right---in short, Tides of War is a triumph.” —Simon Schama

“A page-turner…A welcome and entertaining contribution to the genre…The great appeal of her book is that history here is like quicksilver, assuming new shapes that are never quite the ones you imagined.” —Charles McGrath, The New York Times

“The descriptions of the era, from the battlegrounds of the Peninsular War to the lab that captivates Harriet back in England, are enchanting.” —USA Today

“Tillyard is ambitious and precise in her knowledge of historical detail….She sees those tendrils of the war that have reached into our time.” —Jane Smiley, The Washington Post

Stella Tillyard has been described by Simon Schama as "dazzling . . . a phenomenally gifted writer." Her books include Aristocrats: Caroline, Emily, Louisa and Sarah Lennox, 1740-1832; Citizen Lord: Edward Fitzgerald, 1763-1798; and most recently A Royal Affair: George III and his Troublesome Siblings. She has lived in the United States and Italy and now lives in London.