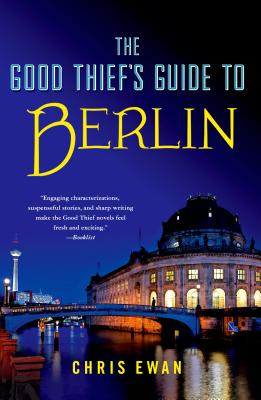 The Good Thief's Guide to Berlin

You can't keep a good thief down . . . Charlie Howard is back and robbing the city of Berlin blind, until he witnesses a murder being committed right before his eyes

Charlie Howard, part-time writer, part-time thief, has been engaged in a veritable spree of larceny and misappropriation since moving to Berlin, Germany. He's supposed to be working on his next novel. But high rent and a love for thrill-seeking has been hard on his word count.

But Charlie's larcenous binge is interrupted by the call to duty on behalf of Her Majesty's Government. Four embassy employees are suspected of stealing a sensitive item. Charlie is to break into their homes, find the culprit and recover the stolen property. But there's a catch. The item is so sensitive, Charlie isn't told what he's looking for. Not its size, not its weight, nothing. He's only told that he'll recognize it when he sees it.

Charlie has been a successful thief because he follows his own rules, the first being "Don't get caught." Well, after he enters the first suspect's home, he has to add a new rule: "Don't admire the view." As Charlie stares across the street, he sees something he really wishes he hadn't a woman being murdered. And that's just for starters. What follows is a wild adventure in the former cauldron of spies.

With "The Good Thief's Guide to Berlin," Chris Ewan shows why he was voted as one of America's favorite British authors by a "Huffington Post "poll. Clever and wildly entertaining, this is a mystery series that is "big fun" ("The Seattle Times").


Praise For The Good Thief's Guide to Berlin…

"Ewan masterfully merges the comic with the thrilling in this fresh, captivating book.” —RT Books Reviews on The Good Thief's Guide to Vegas

CHRIS EWAN lives on the Isle of Man, and was voted one of America's favorite British authors in a Huffington Post poll. He is the author of four previous "Good Thief" titles and the stand-alone thriller, Safe House, which was named by The Telegraph as one of the top ten crime novels to take on vacation. The first in the "Good Thief" series, The Good Thief's Guide to Amsterdam, was named one of the "best books for grownups" by Publishers Weekly and AARP The Magazine, and one of the best thrillers of the year by the London Times. Both Safe House and his previous "Good Thief" books have received starred reviews.
Loading...
or
Not Currently Available for Direct Purchase