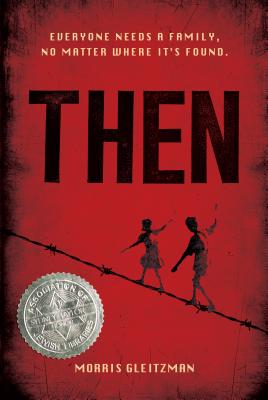 Felix and Zelda have escaped the death camp train, but where do they go now? They're two runaway kids in Nazi-occupied Poland during World War II and the Holocaust. Danger lies at every turn of the road.

With the help of a woman named Genia and their active imaginations, Felix and Zelda find a new home and begin to heal, forming a new family together. But can it last?

Morris Gleitzman's winning characters will tug at readers' hearts as they struggle to survive in the harsh political climate of Poland in 1942. Their lives are difficult, but they always remember what matters: family, love, and hope.

Morris Gleitzman has been a frozen-chicken defroster, fashion industry trainee, department-store Santa, sugar-mill employee, and screenwriter, among other things. Now he's one of Australia's best loved children's book authors. His books have been published all over the world. He is the author of Once, Then, and Now.

“* In a conclusion both devastating and hopeful, the innocence and maturity of Felix's narrative voice conveys human resilience when faced with the impossible.” —Publishers Weekly, starred review

“* Sequel to the searing Once, this tale of young people trying to survive in Poland during World War II is equally powerful. . . . Despite all the grinding misery and the moments of sheer terror, Felix retains his humanity, and a reader surely must walk with the protagonists on their long and tortured journey.” —Kirkus Reviews, starred review

“* While the protagonists are young, this book is for older readers as it spares nothing in its imaginings of the losses and horror that were the Holocaust.” —School Library Journal, starred review

“There is no triumphant climax, and right up until the shocking end, the story of hidden children will grab readers with its details of the daily tension of rescue and betrayal.” —Booklist