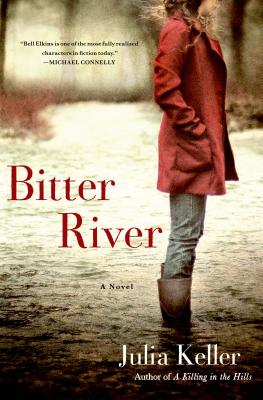 “Fans of character-driven suspense with strong female protagonists will love Bitter River, the latest in Julia Keller's Bell Elkins series. Prosecutor and divorced mom Elkins is questioning her move back from Washington D.C. to her impoverished West Virginia hometown, as she investigates the murder of a teenage girl who seemed to be one of the town's success stories. Meanwhile, forces from outside the town bring an unforeseen threat to Bell's new relationship, and ultimately to Bell herself. Suspenseful and satisfying!”
— Carol Schneck Varner, Schuler Books & Music, Okemos, MI
View the List

In the next stunning novel from Pulitzer Prize-winning Julia Keller, following the popular "A Killing in the Hills," a pregnant teenager is found murdered at the bottom of a river.

Phone calls before dawn are never good news. And when you're the county's prosecuting attorney, calls from the sheriff are rarely good news, either. So when Bell Elkins picks up the phone she already knows she won't like what she's about to hear, but she's still not prepared for this: 16-year-old Lucinda Trimble's body has been found at the bottom of Bitter River. And Lucinda didn't drown she was dead before her body ever hit the water.

With a case like that, Bell knows the coming weeks are going to be tough. But that's not all Bell is coping with these days. Her daughter is now living with Bell's ex-husband, hours away. Sheriff Nick Fogelsong, one of Bell's closest friends, is behaving oddly. Furthermore, a face from her past has resurfaced for reasons Bell can't quite figure. Searching for the truth, both behind Lucinda's murder and behind her own complicated relationships, will lead Bell down a path that might put her very life at risk.

“Julia Keller is a beautiful writer and Bitter River has an elegiac force to it that is powerful and gripping. Bell Elkins is one of the most fully realized characters in fiction today. I just turned the last page on this one and I want more.”—MICHAEL CONNELLY

“Julia Keller's lyrical and evocative prose in Bitter River propels the novel until all you can do is hang on until the final page. Her sense of place is spot-on and bittersweet.”—C.J. BOX

“Gripping suspense, a fabulous sense of place and nuanced characters you can't wait to come back to. A must read.” —KARIN SLAUGHTER

“Remarkably written and remarkably tense. . .I loved it.” —DENNIS LEHANE

"Clear the weekend, silence the phone and settle into Acker's Gap, a place as fascinating and fraught with violence and beauty as Daniel Woodrell's Ozarks or William Gay's Tennessee. A killer novel." —TOM FRANKLIN

“A soulful depiction of a beautiful, besieged afterthought of a town.” —People

JULIA KELLER spent twelve years as a reporter and editor for the Chicago Tribune, where she won a Pulitzer Prize. A recipient of a Nieman Fellowship at Harvard University, she was born in West Virginia and lives in Chicago and Ohio. Bitter River is her second adult novel.