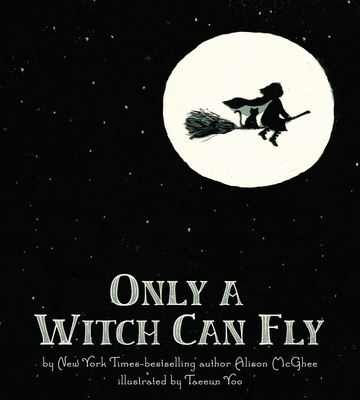 Only a Witch Can Fly

Only a witch can fly.

But one little girl wants to fly—more than anything. So on a special night, with the moon shining bright and her cat by her side, she gathers herself up, she grips her broom tight, and she tries. And she fails. And she's brave. And she tries again. Until . . .

Only a Witch Can Fly is a 2010 Bank Street Best Children's Book of the Year.


Praise For Only a Witch Can Fly…

“The effortless quiet of McGhee's words is beautifully matched by Yoo's pictures. …There's more than enough magic in these pages…for young readers and for their parents, who might otherwise give up on finding anything truly enchanting about Halloween.” —The New York Times Book Review

“It's an enchanting book that makes a compelling point about the perseverance needed to follow your dreams. It's not hard to imagine such a potent message resonating with young readers this Halloween.” —BookPage

“This sophisticated picture book is rich with imagination… More personal, quiet, and transcendent than most Halloween books, this is not a call to witchcraft, but rather to following one's heart.” —Booklist

“Like its protagonist, this book soars.” —Kirkus Reviews, starred review

“This gentle, lyrical tale, written in the unusual poetic stanzas of a medieval sestina, recounts a young trick-or-treater's dogged attempts to make her dreams of flight come true. …This is a quieter, more reflective addition to Halloween collections that offers an enchanting storytime read-aloud.” —School Library Journal

“Beneath the vintage spooky setting lies a subtle message about perseverance and individuality.” —Publishers Weekly

“Written as a sestina, a poetry form that originated in the twelfth century, the words and pictures evoke the magic of Halloween and a little girl's longing to fly.…superb linoleum block prints with hints of another time fill each double-page spread.” —Children's Literature

Alison McGhee is the award-winning author of numerous books for children and adults, including the New York Times best-selling picture books Somebody, illustrated by Peter Reynolds, and A Very Brave Witch, illustrated by Harry Bliss, and the novel, Shadow Baby, a Pulitzer Prize nominee and a Today Show pick. McGhee is a professor of creative writing at Metropolitan State University, and a founding member of Hamline University’s MFA in Writing for Children and Young Adults. She lives in Minnesota with her family.

Taeeun Yoo received the Founders Award—for the most promising new talent of the year—from the Society of Illustrators for her debut picture book The Little Red Fish, for which Publishers Weekly in a starred review raved, “exhilarating visual images . . . shutting the book feels like awakening from a dream.” She also illustrated stunning new covers for Madeleine L’Engle’s A Wrinkle in Time quintet. Born and raised in Korea, Yoo came to New York City to study illustration at The School of Visual Arts where she earned her MFA. She lives in New York City.
Loading...
or support indie stores by buying on
(This book is on backorder)