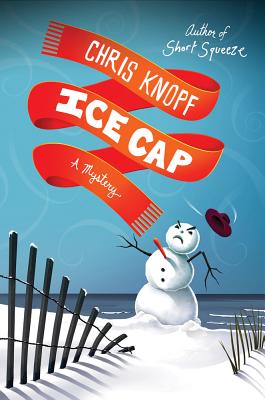 Crazy weather, crazy artists, organized crime, and digital wizardry all play a role in a murder mystery that could only happen in the Hamptons.

It's the worst winter on record. Jackie Swaitkowski has made the transition from lackadaisical, pot-smoking real-estate lawyer to obsessive, pot-smoking criminal defense attorney. And now, not only are there blizzards to contend with, her ne're-do-well client is headed for a first-degree murder rap.

The case pulls Jackie reluctantly back into her late husband's extended, and famously outrageous, family. Complicating matters is a handsome journalist whose interest in Jackie exceeds the professional. "Ice Cap "marks the return of Jackie Swaitkowski, outlandish lawyer to the rich and criminal, by award-winning author Chris Knopf, who's been praised by "Publishers Weekly "for his "hard-boiled dialogue worthy of Elmore Leonard or John D. MacDonald.

CHRIS KNOPF is the author of two previous Jackie Swaitkowski mysteries, "Bad Bird "and "Short Squeeze, "and the Sam Acquillo mystery series, including "The Last Refuge, Two Time, Head Wounds "(which won the Benjamin Franklin Award for Best Mystery), "Hard Stop, ""and Black Swan, ""as well as the stand-alone novel Elysiana. "He lives with his wife, Mary, in Avon, Connecticut, and Southampton, New York.

Praise For Ice Cap: A Mystery…


“Knopf has a knack for big opening scenes that set the tone for his danger-fraught plots and draw the reader into the dysfunctional world of Swaitkowski, who drinks too much, smokes pot, and attempts to evade too-close relationships.”—Library Journal


“[Knopf] tells a rollicking tale with lots of twists and turns, adding up to a great deal of enjoyment.”—The Washington Times


“Knopf has a touch I like---cool, careful, reflective---and a great ear for the comic eccentricities of the human voice.”—Marilyn Stasio, The New York Times Book Review