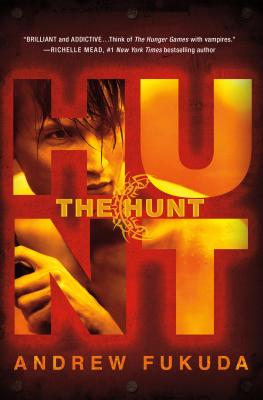 The Hunt (The Hunt Trilogy #1)

Don't Sweat. Don't Laugh. Don't draw attention to yourself. And most of all, whatever you do, do not fall in love with one of them.

Gene is different from everyone else around him. He can't run with lightning speed, sunlight doesn't hurt him and he doesn't have an unquenchable lust for blood. Gene is a human, and he knows the rules. Keep the truth a secret. It's the only way to stay alive in a world of night-a world where humans are considered a delicacy and hunted for their blood.

When he's chosen for a once in a lifetime opportunity to hunt the last remaining humans, Gene's carefully constructed life begins to crumble around him. He's thrust into the path of a girl who makes him feel things he never thought possible-and into a ruthless pack of hunters whose suspicions about his true nature are growing. Now that Gene has finally found something worth fighting for, his need to survive is stronger than ever-but is it worth the cost of his humanity?

“With razor-sharp prose, a genius plot, and a searing pace that will have you ripping through the pages, Fukuda creates a dark and savage post-apocalyptic world where humans are nearly extinct and love manages to bloom despite all the odds stacked against it. An exceptional novel--I can't wait for the sequel!” —Alyson Noël, #1 New York Times bestselling author of the Immortals Series

“One of the most brilliant, original books I've read in a very long time. This is the kind of book you'll want to stay up with all night to finish!” —Richelle Meade, #1 New York Times bestselling author of the Vampire Academy series

“In this terrifying and inventive adventure, Fukuda turns the vampire novel inside out…With an exciting premise fueled by an underlying paranoia, fear of discovery, and social claustrophobia, this thriller lives up to its potential while laying groundwork for future books.” —Publishers Weekly

“The story is bona fide creepy, and as it builds to its cliffhanger ending (which delivers quite a good twist), readers will be torn between hoping Gene can maintain the ruse and that he will take on the bloodsuckers already. As revolutions go, this one is well worth keeping on your radar.” —Booklist

“Fukuda takes the feeling of isolation that dominates adolescence and builds a world around it in a novel where the tension rarely slackens. He turns up the violence a notch from THE HUNGER GAMES with language that is as graphic as it is eloquent. Readers will hanker for answers as they'll discover a kindred spirit in Gene, who so eloquently describes the feeling of being an island in the middle of a vast ocean.” —Maximum Shelf

“Utterly disturbing, dark, twisted, but incredibly fascinating at the same time. It was a ride like nothing else I've read before. Gene was a smart and sharp hero I loved to follow! And the ending was incredible with a cliffhanger that will leave you hanging and wanting more - right now! If you are up for a thrilling ride then go and get The Hunt!” —Bewitched Bookworms

“The Hunt was fast paced and awesome, propelling me forward with each new twist. It was dark, gritty, and intense. Gene was a dynamic character, while the surrounding characters were insanely creepy. They were ruthless, and it was perfect. And the ending? Just right!” —The Passionate Bookworm

“Action-packed, heart-pounding, page-flipping action. I’m thoroughly in love. The Hunt is a riveting, thrilling read — definitely one of my favorite books of 2012 so far. I can’t wait to get my hands on a sequel, even if I have to wait a year for it.” —YA Reads

“This book was hard to put down. I kept thinking about it when I wasn't reading it! I just love this new world Mr. Fukuda created.” —Milk and Cookies

“I loved every minute of The Hunt! I couldn't put it down. It's horrific, terrifying, gruesome, and inspiring. A story of survival, loss, and sacrifice that had me reading late into the night and early into the morning. If you haven't already added The Hunt to your TBR I highly recommend it.” —Paperblog

“An insane adventure sure to have your heart racing.” —Page Turners

“Great book. The Hunt is at once intriguing and frightening. It's twisted and dark with just enough hope that it kept me on my toes and turning the page. I can't wait to see what happens in the series because it should be interesting!” —I'm Loving Books

“Andrew Fukuda has given us a vampire version of THE HUNGER GAMES. . . one of the creepiest novels I have ever read. Gene is a beautiful character. Seeing his feelings really made this story for me . . . a must read.” —I Heart YA Books

“I fell in love with this book. I'm just going to say all the huge cliché things right now, because they express my sentiments exactly... ‘I couldn't stop turning the pages,' ‘I was up reading all night,' ‘I didn't want the story to end' and ‘I CANNOT WAIT TO READ THE SEQUEL!'” —Taming the Bookshelf

“Very unique. This book is a standout. Andrew Fukuda has some good and original ideas. This series will only get better with each sequel.” —Poetry to Prose

“The action never stopped! Brilliantly written, the author weaves the story of Gene and his lonely, isolated life, and his desperate fight to blend in that is literally a fight for survival. The book ends with an interesting puzzler, meaning much more to come in the next installment. Highly recommended.” —YA Lit Ramblings

“With a last line that will leave you stunned you will immediately want to hunt down Andrew Fukuda and demand to know what happens next. This book definitely deserves four stars!” —The Book Vortex

“An intense ride and an exciting start to a new series.” —Love YA Lit

“Violent, intense and absolutely captivating. I highly recommend this. I will definitely be reading the sequels!” —Rex Robot Reviews

“One of the best vampire books I've ever read! This is a breath of fresh air within the genre…. Definitely makes my best of 2012 so far list. If you're looking for something fresh to read within the paranormal and dystopian genres, The Hunt is for you.” —Birth of a New Witch

“Fast-paced and exciting...Andrew Fukuda does a wonderful job of blending traditional vampire lore with cool and new ideas. Even if you aren't a fan of vampire stories, you should give this a try. The Hunt is definitely unique.” —Karin's Book Nook

“This book was fascinating. . . you'll want to read Gene's story.” —This Blonde Reads

“If the Hunger Games were taken over by vampires, this would be the result. A perfect blend of horror and YA fantasy, The Hunt sets a whole new bar for vampire novels. With incredible suspense, drama, ethical dilemmas, and a bit of romance – it's completely riveting. I loved every minute of this fast-paced, thrill ride. Don't miss this one.” —SciFiChick.com

“One heck of a rollercoaster ride. So good!” —Good Choice Reading

“A fascinating thriller starring two fabulous protagonists...fast-paced and filled with chilling action. Fans will appreciate joining Gene as he tries to avoid becoming the prey of The Hunt.” —Alternate Worlds

“The Hunt keeps you in your seat and demands you stay there. With the constant threat of heart-pumping danger and imminent death, the characters only grow closer and stronger. Shining like a beacon of humanity in a very dark and scary world, I highly recommend this book.” —Teen Librarian's Toolbox

“Andrew Fukuda managed to surprise me. I can't wait to see how it continues in the next book.” —Fighting Dreamer

“Fast paced, horrifying and delicious! The Hunt is a brilliant new series…steeped in horror and riddled with tension and fear that left me spent and wanting more. I highly recommend. One of my favorite reads for 2012.” —Kimba the Caffeinated Book Reviewer

“The Hunt by Andrew Fukuda was completely out of this world! One of the best novels I've had the pleasure to read in a long time.” —The Book Faery

“… the perfect blend of the Hunger Games and vampires, and that ending just begs for a sequel!” —Reading, Writing, Breathing

“A thrilling, nonstop ride that I couldn't set down. The Hunt for sure is my favorite vampire novel this year.” —Tina's Book Reviews

“This dystopian stands out from the rest. The reader will be thrown into the story from page one and unable to put the book down…one of the best male characters I have had the chance to read about. A refreshing change.” —Live to Read

“Excellent…fantastic and truly top-notch. I highly recommend checking The Hunt out!” —Hippies, Beauty and Books, Oh My!

“Intense, violent, and captivating…Gripping right from the very start…a refreshing approach to the already familiar vampire genre. Readers will instantly be hooked and they'll devour it no time.” —JeanBookNerd.com

“Fukuda is a master of mental fear and he truly wrote a story that will scare you deep to your core.” —Books and Beyond