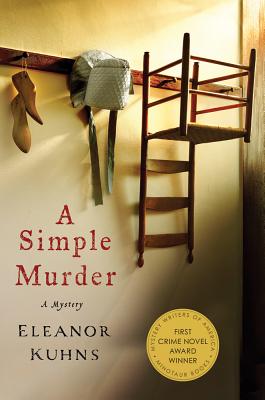 Five years ago, while William Rees was still recovering from his stint as a Revolutionary War soldier, his beloved wife died. Devastated, Will Rees left his son, David, in his sister's care, fled his Maine farm, and struck out for a tough but emotionally empty life as a traveling weaver. Now, upon returning unexpectedly to his farm, Rees discovers that David has been treated like a serf for years and finally ran away to join a secluded religious sect--the Shakers.

Overwhelmed by guilt and hoping to reconcile with his son, Rees immediately follows David to the Shaker community. But when a young Shaker woman is brutally murdered shortly after Rees's arrival, Rees finds himself launched into a complicated investigation where the bodies keep multiplying, a tangled web of family connections casts suspicion on everyone, and the beautiful woman on the edge of the Shaker community might be hiding troubling ties to the victims. It quickly becomes clear that in solving Sister Chastity's murder, Rees may well expose some of the Shaker community's darkest secrets, not to mention endanger his own life.

An atmospheric portrait of a compelling time in American history, "A Simple Murder" is an outstanding debut from Eleanor Kuhns, Minotaur Books/Mystery Writers of America's 2011 First Crime Novel Competition Winner.


Praise For A Simple Murder: A Mystery…

"A Simple Murder works as an intense historical but also a heartfelt story about families, especially the bonds between fathers and sons, and the grievances that can pull relatives apart. . .Kuhns' affinity for showing the complicated relationships that drive people shines in this strong debut.”
—Oline Cogdill, Kansas City Star


"Kuhns's closed-room mystery is refreshingly original, both for its setting and time period. In keeping with her protagonist's profession, Kuhns weaves together disparate threads into a beautiful finished piece."
—Library Journal (starred review, Debut of the Month)

“This outstanding debut won the 2011 Mystery Writers of America/Minotaur Books First Crime Novel Competition, and it’s as good an argument for continuing these contests as it gets. Kuhns, a career librarian, delivers a superbly researched and beautifully crafted historical mystery.”
—Toronto Globe & Mail

“A gripping historical mystery. . . With an ingenious story line (including a truly surprising conclusion), fascinating characters and a profound sense of time, place and culture, A Simple Murder marks a debut brimming with promise.”
—Richmond Times-Dispatch

ELEANOR KUHNS is the 2011 winner of the Minotaur Books/Mystery Writers of America First Crime Novel competition. She lives in New York, received her master's in Library Science from Columbia University, and is currently the Assistant Director at the Goshen Public Library in Orange County, New York. "A Simple Murder" is her first novel.
Loading...
or
Not Currently Available for Direct Purchase