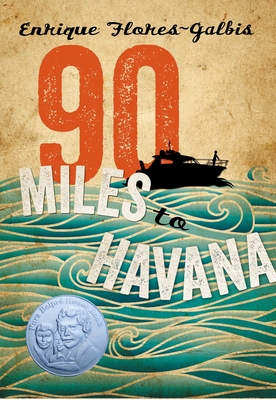 90 Miles to Havana is a 2011 Pura Belpré Honor Book for Narrative and a 2011 Bank Street Best Children's Book of the Year.

When Julian's parents make the heartbreaking decision to send him and his two brothers away from Cuba to Miami via the Pedro Pan operation, the boys are thrust into a new world where bullies run rampant and it's not always clear how best to protect themselves.


Praise For 90 Miles to Havana…

“Inspired by Flores-Galbis' experiences as a Pedro Pan refugee, the fast-moving story should easily hook both historical-fiction and adventure readers.” —Bulletin of the Center for Children's Books

“It's hard to imagine any child putting this book down.” —School Library Journal

“It will introduce readers to a not-so-distant period whose echoes are still felt today and inspire admiration for young people who had to be brave despite frightening and lonely odds.” —Kirkus Reviews

“Drawing on his own experience as a child refugee from Cuba, Flores-Galbis offers a gripping historical novel about children who were evacuated from Cuba to the U.S. during Operation Pedro Pan in 1961. . . . This is a seldom-told refugee story that will move readers with the first-person, present-tense rescue narrative, filled with betrayal, kindness, and waiting for what may never come.” —Booklist

Enrique Flores-Galbis, at age nine, was one of 14,000 children who left Cuba in 1961, without their parents, in a mass exodus called "Operation Pedro Pan." He and his two older brothers spent months in a refugee camp in southern Florida and this historical novel is inspired by that experience. Enrique is the author of RAINING SARDINES and he lives in Forest Hills, NY with his family.
Loading...
or support indie stores by buying on