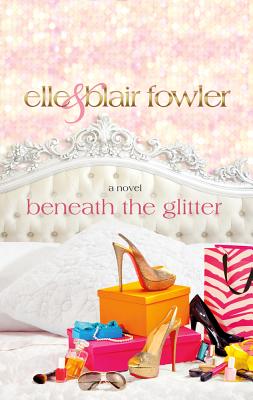 From internet stars Elle and Blair Fowler comes a scintillating new novel that takes readers "Beneath the Glitter "of the glitzy L.A. social scene.

"Welcome to a place where dreams are made. And where nothing and no one is ever what it seems."

After their make-up and fashion videos went viral on YouTube, sisters Sophia and Ava London are thrust into the exclusive life of the Los Angeles elite. Here fabulous parties, air kisses, paparazzi and hot guys all come with the scene. Sophia finds herself torn between a gorgeous bartender and a millionaire playboy, and Ava starts dating an A-list actor. But as they're about to discover, the life they've always dreamed of comes with a cost.

Beneath the glitter of the Hollywood social scene lies a world of ruthless ambition, vicious gossip and betrayal. Someone close to them, someone they trust, is working in the shadows to bring the London sisters falling down. And once the betrayal is complete, Sophia and Ava find themselves knee-deep in a scandal that could take away everything they care about, including the one thing that matters most each other.

ELLE and BLAIR FOWLER began filming makeup and fashion tutorials for YouTube in the summer of 2008. Their videos quickly garnered millions of views and national media attention. They live in Los Angeles and are currently launching a makeup line scheduled to release in Fall 2012.
Loading...
or
Not Currently Available for Direct Purchase