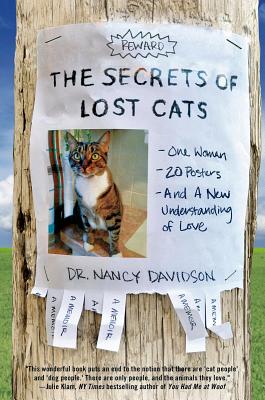 The Secrets of Lost Cats (Hardcover)

One Woman, Twenty Posters, and a New Understanding of Love

You've seen them. Hanging on telephone poles and posted on supermarket bulletin boards.

But have you ever wondered about the stories behind them?
When her orange tabby, Zak, disappeared, Nancy Davidson did what countless people before her had done. She made a lost cat poster. And after days of frantic searching, she found him. Nancy was ecstatic. Zak seemed happy, too although being a cat, it was hard to tell.

Zak may have remained his old self, but Nancy had changed. From that moment on, she became acutely aware of lost cat posters. She studied their language, composition, and design. She was drawn to their folk art. Mostly, however, she was intrigued by the messages themselves the stories "behind "the posters. It wasn't long before Nancy reached out to other owners of lost and found cats to offer empathy and support. They told hilarious and often poignant stories. They sought advice.

That's when Dr. Nancy, the cat lover and the seasoned therapist, stepped in and offered insights brought to light by her shrewd, but never self-serious analysis. What they told her and what she learns creates a captivating look into the heart of our relationships with our pets and each other. For seven years, Dr. Nancy followed the lost cat trail discovering answers to a question that eventually touches all of us: What will you do for love?

"The Secrets of Lost Cats "traces the evolution of Nancy Davidson's seven-year passion for lost cat posters. From the astonishing, almost implausible posters she encounters across the country and indeed, the world to the daring, dedication, and emotional complexity of the cat owners themselves, "The Secrets of Lost Cats "offers readers an absorbing journey that illuminates love, loss, and learning to love again, even more deeply.

DR. NANCY DAVIDSON is a psychotherapist, weekend feline sleuth, and the creator of The Secrets of Lost Cats. She lives in Manhattan and Los Angeles.

Praise For The Secrets of Lost Cats: One Woman, Twenty Posters, and a New Understanding of Love…

"This wonderful book puts an end to the notion that there are cat people and dog people.  There are only people—and the animals they love." —Julie Klam, New York Times bestselling author of You Had Me At Woof


“Dr. Nancy Davidson takes a brilliant idea for a book, clamps down on it like a cat with its ‘mousie’ toy, and runs from one insight to another about people and the kitties who own them. But beware. After you read this you may never be able to just walk past a lost pet poster again.” – Bob Tarte, author of Kitty Cornered, Enslaved by Ducks, and Fowl Weather

"The best animal stories are ultimately human stories as well, and this book is a beautiful testament to just that.  The stories in these pages--each one a gem--will make you laugh, cry, hug your own felines a little bit closer, and in the end remind you why those of us who love our cats would do anything in the world for them." - Gwen Cooper, New York Times Bestselling author of Homer’s Odyssey

“She writes with sensitivity and respect about the roles cats and their human companions play with each other and the extent to which a person would go to get their beloved feline back – including breaking and entering and hiring psychics and pet detectives. Some cats were found, others returned on their own – and some never came back, leaving owners depressed and guilty. But the overall feelings Davidson sensed were ones of love and compassion, and these threads run strong throughout The Secrets of Lost Cats.” –Shelf Awareness

“Each of the brief glimpses into the cat owner’s lives proves captivating. Davidson has an engaging writing style and clever concept; people’s relationships with pets can reveal much about their personalities, and how a pet owner reacts when his or her pet is suddenly lost can be even more illuminating. Davidson has taken a narrow interest – cat ownership – and used it to examine human nature.” –Publishers Weekly